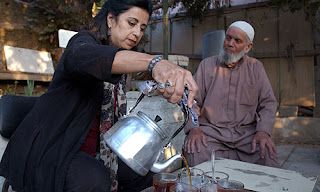 Having lived and worked in the Middle East for almost ten years, I have a great interest in what happens there. As I write this, the best-selling Egyptian author Ahdhaf Soueif is on the streets of Cairo demonstrating for democracy in her country. She's not alone in being politically active.  Not long ago it was Swedish author Henning Mankell on TV, arrested on board an aid convoy bound for Gaza. Indian author Arundhati Roy put her literary career on hold after winning the Booker Prize in order to use her profile to expose human rights issues on the Indian sub-continent.
“I had this light shining on me at the time, and I knew that I had the stage to say something about what was happening in my country. What is exciting about what I have done since is that writing has become a weapon, some kind of ammunition.”

Roy has been widely criticised for using her public platform as a writer to promote her political views. But she was awarded the Sydney Peace Prize in 2004 for her work. 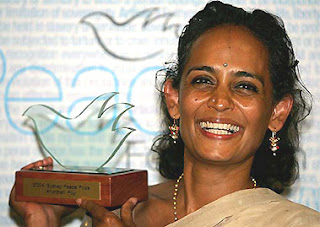 Being a writer gives you a kind of privilege - you have a voice and an audience - a ready made soapbox to express opinions. There are many who feel that being a published writer puts you under an obligation to use your position to expose injustices, but there are also those who feel strongly that your work and politics are best kept separate. What is certain is that having a public platform is a responsibility - and readers of novels don’t like too much obvious polemic. Gide wrote in 1927 that one should ‘never present ideas except in terms of temperaments and characters’.

Arundhati Roy has opted for non-fiction to express her point of view (Listening to Grasshoppers); but Henning Mankell’s thrillers are an ideal vehicle to expose corruption in public life under the veil of fiction.

I’m a great admirer of Ahdhaf Soueif’s short stories, particularly the volume called ‘I think of You’. The politics of the Middle East are there in the narrative, in the voices of the characters and the circumstances of their lives. In ‘Melody’ the narrator is peering out of the window at the swimming pool in the garden of the compound she lives in. ‘We’re not allowed to use the pool; us women I mean. It’s only for the kids - and the men of course. They can use anything. And they do. Use anything I mean.’ Not all the stories have a feminist point of view, but all expose the difficulties of living inside a system that denies freedom of expression and what we would consider basic human rights to all but a select few.

As writers we can't help but reflect the world we live in.  I hope against hope for the democratisation of Egypt, but I fear that the need for Europe and America to have stability (for its oil supplies and as a bulwark against Islamic extremism) will stifle the infant, and currently unfocussed, pro-democracy movement, as the West has done in other countries in the past. And I fear more than anything, that that will allow the extremists to prevail and create greater chaos in the long term.

I would like Arundhati Roy’s creed to be mine, but it’s a lot to live up to:

“To love. To be loved. To never forget your own insignificance. To never get used to the unspeakable violence and the vulgar disparity of life around you. To seek joy in the saddest places. To pursue beauty to its lair. To never simplify what is complicated or complicate what is simple. To respect strength, never power. Above all, to watch. To try and understand. To never look away. And never, never, to forget.”

Arundhati Roy’s Listening to Grasshoppers: Field Notes on Democracy, is well worth reading, as is anything by Ahdaf Soueif. You might also like to check out Fadia Faqir, who lectures at Durham University and is a brilliant writer, whose novels focus on the dilemmas of the middle east.
Labels: Ahdaf Soueif Arundhati Roy Fiction Henning Mankell Middle East. non-fiction politics.