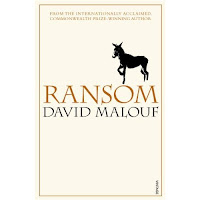 My thoughts dwelling quite a lot on Queensland, by coincidence I’ve been reading an author born and bred in Brisbane - Australian novelist, poet and short story writer David Malouf. I’ve been reading his slim novel ‘Ransom’ which is a re-telling of one of the most poignant incidents in Homer’s Iliad. It’s the story of how Priam, King of Troy, cast off his kingly regalia and rode out in a mule cart, loaded with golden treasure, attended only by the carter, to penetrate the Greek lines and ask Achilles to return the body of his son Hector, slain by Achilles in battle, in exchange for the gold. The character who comes out of this story most strongly is the carter, Somax, whose ordinary life is the complete invention of the novelist and who has more substance than the characters reconstructed from the mythic history. The story is told in what is somewhere between prose poetry and poetic prose. This is the section where Priam has the moment of waking dream that shows him what he must do.
"Priam’s mind is as clear now as if he had slept for the whole of these eleven days and nights and woken entirely restored, his spirits quickened and lightly expanding in him.
He sits very still, his shoulders in the spare frame a little sunken; and the picture that forms before him is of himself seated just as he is here, but in full sunlight on the crossbench of a cart. A plain wooden cart, of the kind that workmen use for carrying firewood or hay, and drawn by two coal-black mules.
He himself is dressed in a plain white robe without ornament. No jewelled amulet at his breast. No golden armbands or any other form of royal insignia.
On the bench beside him the driver of the cart is a man, not so old as himself but not young either. A bull-shouldered fellow he has never seen before, in an ungirdled robe of homespun. A bearded, shaggy-headed fellow, rough but not fearsome.
Behind them, the bed of the wagon is covered with a wicker canopy, and something there is shining out from under a plain white cover. Gold or bronze it must be. It is pouring out light.
But he knows what it is - no need to lift a corner of the cloth and look beneath.

Quickly he rises, and passing the servant, who this time does not stir, swings open the door to his chamber and begins down the corridor. His blood is racing. ...

Outside, the corridor is dark, save for braziers set at easy arm’s reach along the wall and extending at intervals to the distant portal. The effect is of a black flood that has risen above head height, thick, solemn, lapping at the flickering redness of the upper walls, so that stepping out into it, what he feels is an unaccustomed lack of ease - he for whose convenience everything here is arranged by the conscientious forethought of stewards and the labour of a hundred slaves.
Here and there, as he passes, the faces of servants who sit backs to the wall, at this or that chamber entrance, loom up in the dark. Startled to see him at this hour and unattended, they stir and mutter the usual courtesies, but he is gone before they can stumble to their feet.
Yes, yes, he thinks, all this I know is unprecedented.
But so is his plan. This plunging at near dawn down a deserted corridor is just the beginning. He will get used to the unaccustomed. It is what he is after.
He feels bold now, defiant. Sure of his decision"

Quite a lot of David’s poetry is on the internet - this is a link to my favourite one - a powerful elegy called ‘Absences’ about his relationship with his mother.