I’ve just been for a walk up the river, through the woods, to see what changes have been made by the recent flooding. The high water scours the ground, fells weakened trees and washes away the riverbank in new places, depositing drifts of sand and gravel on the low-lying meadows, gradually altering the landscape. I found the wire fences which a few weeks ago were beautiful ice-sculptures, now intricately woven barriers of leaf and grass. 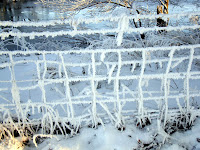 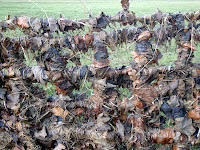 There was a strong east wind blowing through the woods, creating the effect I love most - the sound of an ocean roaring over your head. One of my favourite poems since I was a child, has been those lines of Robert Frost I learned by heart at school.

The woods are lovely, dark and deep,
But I have promises to keep,
And miles to go before I sleep .......

Robert Frost never explains why the ‘I’ of the poem is ‘stopping by woods on a snowy evening’, but the mysterious poem somehow encapsulates our fascination with those remnants of the primeval forest that still survive. Things have changed a lot in a thousand years. Once we fenced ourselves in to protect Us from the Wild Wood; now we fence off the woods to protect them from Us.

In Britain, the government are proposing, as part of the sell-off of the family silver to pay the debts accrued by our banks (£1400 for every man, woman and child on the planet!!) to sell our publicly owned forests into private hands. It isn’t going to raise a great deal of money, given the scale of the debt, but it’s an easy way of raising short-term cash. In the long term it will be a great loss. Our forests are among the very few wild spaces available to us, especially in the crowded south of the country.

The government says that it’s going to oblige the new private owners to keep them open for public access but this is, frankly, a joke. Here in the north, one of our most treasured bits of ancient woodland has recently been sold to a private owner. Now the gates are padlocked, barbed wire stretched across the top to deter climbers, notices erected saying ‘Private Land’ and tree-trunks rolled across the footpaths as obstacles to deter the intrepid. Yes, we have legal right of entry, but physically it’s almost impossible to exercise. In Cumbria we stand to lose another 39 of our most beautiful forests to this criminal privatisation plan.

I love walking in the woods along the edge of the river here - a treasured public footpath. Whatever the problem I set out with, I’m almost certain to think of a solution before I return. The river is edged with alders, but the slopes are covered by larch and beech and the whole has a secret, watchful quality as if wolves and bears still lurked in the shadows. Now only deer, badgers and rabbits leave their footprints on the paths, as well as otters and wading birds.  Overhead there are occasional glimpses of red squirrels. 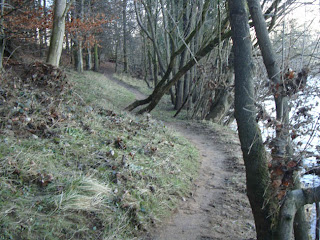 How can you sell the earth? How can you own something that existed before human beings had even evolved? When the first men and women began to walk upright and shed their fur coats, there weren’t any estate agents with clipboards and measuring tapes waiting to sell them a chunk of rain-forest. We went in for land-grabbing. When the nomads began to settle down, they protected valuable feeding and hunting grounds for their family groups - they took possession and defended the territory with their muscle power. Nothing’s changed. Pieces of earth are still owned by those with the most muscle, or money.

This is the link to 38 degrees - an organisation helping to co-ordinate opposition to the sell-off.
Labels: Government sale of forests Woodland