Walking in the Marble Mountains

It's a bit of a ritual for us to go for a Christmas Day walk in the mountains, whatever the weather.  We've been out in hurricanes, monsoon rains, Lake District mizzle.  I've got a whole album of photographs taken cowering behind walls, under trees, almost invisible in thermo-fleece and Berghaus!  But this year the sun shone - bitterly cold at 4,500 feet, but clear, blue and sunny. 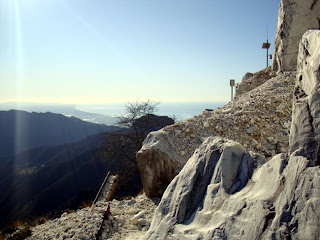 The marble quarries stop work at christmas, so it's a good opportunity to get up into the high mountains using the tracks they've built for the gigantic rock lorries without risking one's life.  This year we went up to the Henraux quarry on the highest flanks of Mt Altissimo, whose summit is getting lower year by year.  They are literally slicing it off. 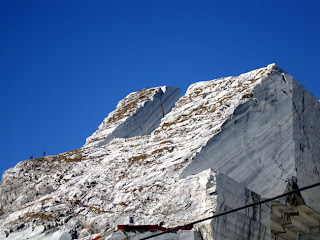 Tough environmental call for a sculptor who loves working with the stuff, watching the environment be altered so drastically.  But it's not sculpture that's done this - a few blocks here and there for statues etc can be accommodated - no, it's the public appetite for bathroom tiles, fireplaces and table tops that's eating it away at this rate, helped by the ease with which it can now be quarried.  Once it took months to cut a marble block by hand;  now it takes minutes.  And you don't have to take it down to the town by buffalo sled (which took days).  A lorry can do the trip in half an hour.  How much of the mountain will be there when we walk back next year?  I suppose that depends on what happens to Italy's economy.  The machinery is idle at the moment. 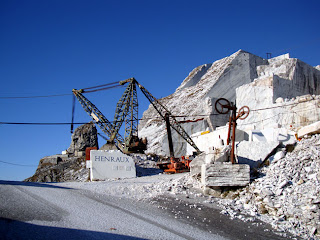 Tomorrow we're off to an Italian town further south - Orvieto, near Perugia - for New Year.  It's the birthday of  jazz musician Stan Tracey and Neil (who used to run a jazz festival in England) has been invited to the party.  I'm really looking forward to seeing another part of Italy, as well as the music and the festivities.

Oh, and this year's Christmas picture?  Muffled up to the eyebrows for the sub-zero temps, but at least it wasn't raining!  Auguri and Buone Feste everyone!