The Lost City of Luni

Neil and I try to take our days off during the week, rather than trying to battle crowded roads and pavements on Saturday and Sunday.  This week, grasping the opportunity of a bright, sunny winter’s day, we headed out a few miles north - about forty minutes drive - to find the ruins of an old Roman  city we’d heard about from friends. 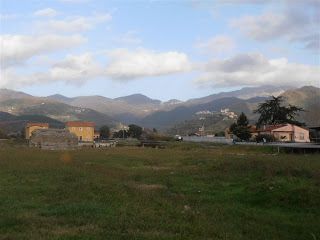 You wouldn’t think that a thriving Roman port of several miles in diameter would vanish.  Luni had existed since Etruscan times and was home to tens of thousands of people, but somehow, around five hundred AD the sea began to recede, the population dwindled, the marble temples tumbled and the city disappeared under a tide of river silt and agricultural loam.  Only one or two bits of evidence remained - fragments of the city wall, the ruins of the amphitheatre, a carved column - the rest was buried under farm buildings and fields, as you can see above.   The sea is now half a mile further out and the nearest port is La Spezia.


In the 1960s archaeologists began to excavate and, although only a fraction of what is there has been uncovered, you can now wander round and look at the buildings they’ve dug up.  Around you, green fields stretch out to the horizon with hummocks and bumps and dips and you know that you’re standing on what were once busy streets and people’s houses.  Most of it will remain underground.   Italy has so much archaeology and precious history - it’s a miracle they manage to afford to preserve so much of it.

This is all that is left of the foundations of the temple - the building itself stood on top in glittering white marble and must have been visible for miles. 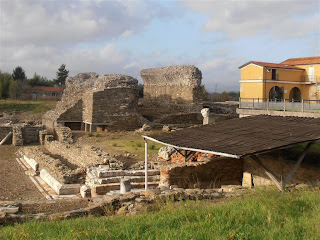 These are vats that once contained olive oil or wine.  You can just see the terracotta necks of some of the ones that have survived. 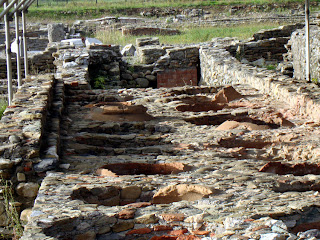 This is the amphitheatre - which is fenced off so I could only take a photo through the wire. 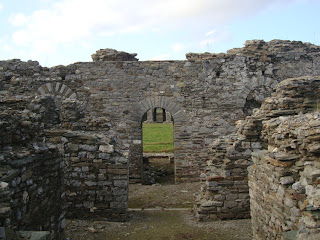 The people didn’t go far though.  Luni is situated beside (and sometimes under!) the modern town of Ortonovo, and afterwards we drove up into the  ‘centro storico’, built - like so many Italian medieval towns, on a fortified hill top. Here you can see profiles straight from a Roman coin, and a woman in the bar with curled hair held back in a band was the image of one of the marble statues in the museum.   Ortonovo Paese was utterly beautiful in the evening light - a stark 9th century tower standing next to a baroque birthday cake of a church in total harmony.   Down below, not a rumour of a Roman city on the plain visible to the naked eye,  and you begin to wonder how long before these human habitations too will vanish and what will replace them? 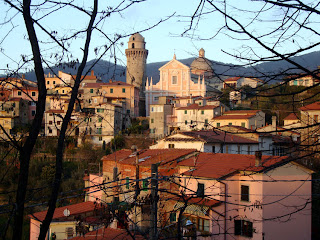