Autumn in the Lake District

It's that time of year again, approaching Hallowe'en - the colourful preamble to the dark, never-ending winter months of the far north. This year Autumn has been spectacular, with long sunny days, very little wind or rain to blast the leaves from the trees and they are gradually beginning to burn like torches beside the river. 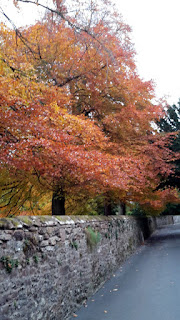 These are the old copper beeches that line the lane that runs up from the river to the hamlet of Bongate - named because the bonded slaves that served the castle used to live here, probably in dreadful hovels. It's a little more genteel these days. 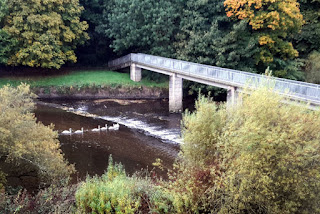 This year the swans have raised five cygnets, all as big as their parents now, though still with their grey colouring, and yesterday I saw them begin their journey down the river - the last I will see of them until the parents (hopefully) return next spring to raise another brood. 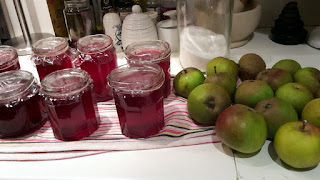 And I've been busy, picking the green windfalls out of the grass and making them into jelly with some blackberries sourced up the lane. There's nothing more satisfying than eating food you haven't had to pay for and that you know is free from any artificial preservatives or pesticides. 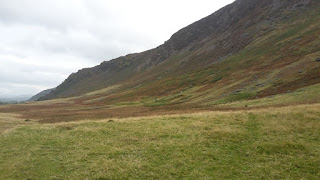 It's also been a busy week, workwise, with visits to York, Huddersfield, and across the Lake District to the west coast.  The fells are looking beautiful - the coarse grass and bracken beginning to turn that wonderful fox colour.  This is Mosedale, near to Caldbeck, where my father had a small fell farm. My native territory and it always makes my heart beat a little faster.

It's getting to the time of year to curl up with a good book. What am I reading?  I've just bought Dundee poet Don Paterson's '40 Sonnets' (shortlisted for the TS Eliot award), which I'm enjoying immensely. I don't like all of them - they're a mixed bag of more traditional and the very experimental.  But any poet who writes a poem about an unborn child hearing his mother's "loud heart like a landlord at the door", and who can produce quattrains like this, definitely gets my vote:

'What is the sound that fades up from the  hiss,
like a glass some random downdraught had set ringing,
now full of its only note, its lonely call,
drawing on its song to keep it singing?" 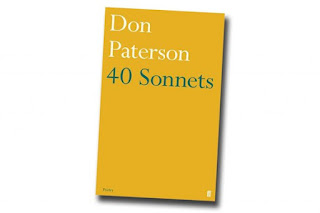