I was asked to be part of the Poetry section of The Writing Process blog tour by Abegail Morley (The Poetry Shed) - she has a fascinating account of what she's currently working on, and so does Robin Houghton  (PoetGal) who was also reading at the Albion Bookshop on Thursday.

For the past two years I've been exploring the mythology of the Haida First Nation people of Canada who lived on the islands called the Haida Gwaii - renamed by Europeans as the Queen Charlotte Islands. I'm particularly interested in the Raven creation myths and have been writing several poems based on these (some published in the Entanglements Anthology of Eco-poetry).  An anthropologist called John Reed Swanton visited the islands at the beginning of the 20th century, learned their language and wrote down as much of their oral literature as he had time for, so there's a big (until recently neglected) archive of stories and poems. The poet Robert Bringhurst has done a great deal of work on these and I found his book 'A Story as Sharp as a Knife' a life-changing book.  It may sound stupid but it was the first time I'd really thought about the fact that our ideas of poetics - language, structure and form - come from Europe and the East, and that there are alternative literary traditions we could be working with.

I find Haida artwork particularly beautiful and I'm fascinated by the way their stories are told in images within it. There are two particularly wonderful Haida artists - one of them is Bill Reid, born in 1920.
And the other is a man whose European name was Charles Edenshaw, who was born in 1839, before European immigrants destroyed Haida culture.

There has just been a huge exhibition of his work in Vancouver, which I was gutted not to have been able to see. I've had to be content with the catalogue, which is a thing of beauty in itself.  His daughter Florence Edenshaw Davidson has a fascinating autobiography called During my Time:  A Haida Woman.

2. How does my work differ from others?

There aren't many poets working with mythology in this particular way.  It's not re-translating or re-interpreting exactly, but exploring the mythologies for the things they can tell us that are relevant to our lives now. People who successfully lived off the land and sea in quite extreme conditions without destroying their environments have a lot to say about the way we live. One day we may have to go back to subsistence living and we may need the knowledge that they had. It's also a personal resistance to the 'givens' of the consumerist society that we live in now.  There's a disconnection with the natural world we depend on and are part of.  It's not a resource to be plundered and exploited - it's a life-capsule.  Ancient cultures understood this.

Part of the answer is above.  I'm concerned about how human beings can survive in the future; concerned about the world we're destroying.  But it's also because the Haida mythology has a fascination for me that I can't quite explain. I love their art work and I love their stories - many of which have cultural significance that has been lost, so there is a mystery at the heart of the story.  One of the stories involves Raven paddling out to steal vaginas for the women of the island, but after several attempts (when the men in the canoe are overcome with 'sweetness' and unable to function) a creature called 'fungus man' is tied into the stern of the canoe to operate the paddle. So the women got their vaginas.   This beautifully carved plate shows fungus man wide-eyed at the rear of the canoe and raven at the front. 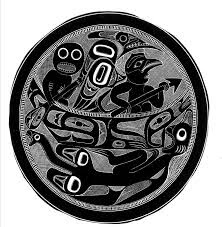 4. How does the writing process work?

I write quite a lot of prose as well as poetry and it's not easy to find enough time for both.  With the Raven poems I have to spend time researching and reading before I can write, so I try to allocate blocks of space.  I've just been to the Pitt Rivers museum in Oxford, which has an interesting collection of Haida artefacts, so I'm going to be working on some more poems from that in the next few weeks.  I really need to go to Canada to visit the islands, but I'd need a travel grant of some kind for that and arts grants aren't easy to get at the moment.


Next week two fellow members of The Tuesday Poets group are going to be talking about their work in progress.

Andrew Bell,  writes poetry, short fiction, plays, screenplays and non-fiction. His work has been published and broadcast in New Zealand/Aotearoa, Australia, England, Israel and USA. His most recent publications are Aotearoa Sunrise, a short story collection, and Clawed Rains, a poetry collection. Andrew lives in Christchurch with his wife and two sons and loves to surf. He blogs at aotearoasunrise.blogspot.com


Keith Westwater is a poet who also lives in New Zealand and has a recent collection called Tongues of Ash.  He's currently working as a training manager for the Earthquake Commission in the wake of the Christchurch earthquake.