who kissed the bairns
in their box beds, left
the eldest in charge
and went into the storm

blinded with sleet,
who felt their way
through a roar
louder than steam engines
that swallowed their curses

hands fish-gutted raw
bones stiff with work,
who dragged the lifeboat
three miles along the storm-bound coast
hauled the twisted sinews of rope
pulled together like oxen

sleeves rolled to the elbow
bodices sodden with sweat
skirts soaked to their shins,
who tasted brine on their lips
their braids loosened to rats' tails
whipping their salt-taut skin
their clogs skidding on stones

like the pale girl, her cheeks blood-red
with the rope round her shoulders
raising a hand to halt
when she smelt the seaweed,
who paused for breath
at Briar Dene before the steep
descent to the sea, lest the lifeboat
break free and crush them all 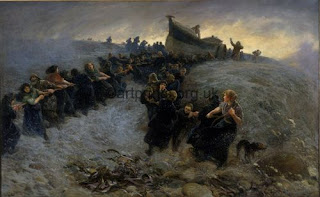 [Based on the painting "The Women" (1910)by John Charlton in the Laing Art Gallery, Newcastle upon Tyne, commemorating the women who dragged the Cullercoats lifeboat to Briar Dene in a storm on New Year's Day 1861]

We've been snowbound since last Tuesday, surrounded by snowmageddon in the shape of The Beast from the East - the worst winter weather in many years.  But at least we've managed to stay warm and well-fed. Friends in outlying villages have been down to their last tin of beans and some were without electricity huddled round a fire for more than 24 hours.  But ferocious storms are a feature of living in the north, particularly the northeast.  The painting and the poem above, celebrate an act of heroism during the great storm of 1861 where - unable to launch the Cullercoats lifeboat - a group of women and young men dragged the heavy wooden lifeboat over a steep headland in a raging blizzard so that  it could be launched in Briar Dene where the 'Lovely Nelly' had foundered.  They managed to rescue everyone on board except the cabin boy.

It's World Women's Day on Thursday, 8th March, so I thought both the painting and the poem were appropriate to celebrate women's achievements. John Charlton's painting celebrated an event that took place when women were still regarded as children under the law, no vote, no right to their own money, no right to their children - higher education and most occupations closed to them. It was painted in 1910 when many of these injustices still existed. We live in a time when the leaders of three major parties in the UK are women - something that would have been unthinkable when I was a child. When I started work there were several professions that you had to give up if you married - a girl I knew was sacked as a nurse (only 3 weeks before the end of her training) when the hospital discovered that she had married before sitting her final exams. In the civil service there were several women who held senior positions although secretly married. Sometimes I think that, as we look ahead at the ground still to be gained, we lose sight of just how far we've come - but at other times  achieving equality feels as difficult as hauling several tons of lifeboat over a headland in a storm.

About Mary Robinson:  "I grew up in Warwickshire and now live on the Lleyn Peninsula within sight of the Welsh mountains. My work includes my debut poetry collection THE ART OF GARDENING (Flambard) and two signed numbered edition pamphlets - Uist Waulking Song and Out of Time, the latter to accompany a poetry/photographic collaboration exhibited at the Friends' Gallery, Theatre by the Lake in 2015. My poetry has appeared in several magazines and anthologies. I won the Mirehouse Poetry Prize in 2013 and the Second Light Poetry Prize in 2017. For the day job I taught English literature in higher and adult education."
Read Mary's Blog here:  'Wild About Poetry'