I am not resigned to the shutting away of loving hearts in the hard ground.
So it is, and so it will be, for so it has been, time out of mind:
Into the darkness they go, the wise and the lovely. Crowned
With lilies and with laurel they go; but I am not resigned.

Lovers and thinkers, into the earth with you.
Be one with the dull, the indiscriminate dust.
A fragment of what you felt, of what you knew,
A formula, a phrase remains,—but the best is lost.

The answers quick and keen, the honest look, the laughter, the
love,—
They are gone. They are gone to feed the roses. Elegant and curled
Is the blossom. Fragrant is the blossom. I know. But I do not
approve.
More precious was the light in your eyes than all the roses in the
world.

Down, down, down into the darkness of the grave
Gently they go, the beautiful, the tender, the kind;
Quietly they go, the intelligent, the witty, the brave.
I know. But I do not approve. And I am not resigned.

It the week in November when we remember the slaughter of world wars and the general insanity, inhumanity, and sheer stupidity of war at any time and in any place. Whether it is Syria, Afghanistan, Croatia, Africa, Germany, Gaza, Japan or Russia, war means loss, grief, death and destruction and images of long lines of ordinary people, women, children, the old the sick, clutching precious belongings and walking away from their ruined lives as refugees. 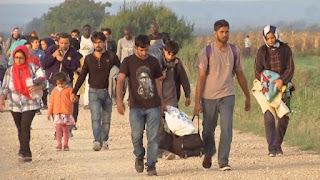 Edna St Vincent Millay lived through the First World War and, living in America, she was isolated from the direct experience of its horrors.  But she articulated the experience of families, lovers and friends who said goodbye to young men, 'the wise and the lovely . . . They are gone', never to see them again.  As in other wars, a generation of women lost the chance of making a relationship and having a family. 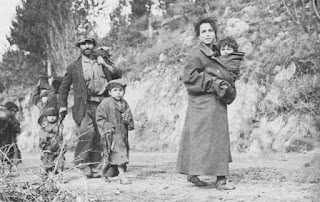 Women's poetry from the first two world wars is sparse - partly because fewer women were published poets at that time and partly because they tended to remain at home rather than go to the front.  They often wrote novels or memoirs rather than poetry - Vera Brittain's Testament of Youth is one of the best.  Edna St Vincent Millay is one of the most lyrical of poets - I particularly love her sonnets.  This one too, is about war and its loss.

What Lips My Lips Have Kissed, And Where, And Why (Sonnet Xliii) -

What lips my lips have kissed, and where, and why,
I have forgotten, and what arms have lain
Under my head till morning; but the rain
Is full of ghosts tonight, that tap and sigh
Upon the glass and listen for reply,
And in my heart there stirs a quiet pain
For unremembered lads that not again
Will turn to me at midnight with a cry.
Thus in winter stands the lonely tree,
Nor knows what birds have vanished one by one,
Yet knows its boughs more silent than before:
I cannot say what loves have come and gone,
I only know that summer sang in me
A little while, that in me sings no more.

Millay was a precocious child and won a Pulitzer Prize for poetry by the time she was 23.  She didn't conform to conventional codes and described her young life as "very, very poor and very, very merry".   Her love life was equally complicated.  She was a life-long pacifist which earned her much condemnation during the second world war.  After she died, in 1950, her sister Norma handled her estate, assisted by the young Mary Oliver. 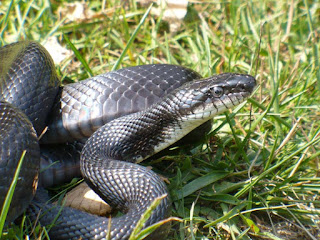