It’s difficult with the weight of the rifle.
Leave it–under the oak.
Leave it for a salvage-bloke
let it lie bruised for a monument
dispense the authenticated fragments to the faithful.
It’s the thunder-besom for us
it’s the bright bough borne
it’s the tensioned yew for a Genoese jammed arbalest and a
scarlet square for a mounted mareschal, it’s that county-mob
back to back. Majuba mountain and Mons Cherubim and
spreaded mats for Sydney Street East, and come to Bisley
for a Silver Dish. It’s R.S.M. O’Grady says, it’s the soldier’s
best friend if you care for the working parts and let us be ‘av-
ing those springs released smartly in Company billets on wet
forenoons and clickerty-click and one up the spout and you
men must really cultivate the habit of treating this weapon with
the very greatest care and there should be a healthy rivalry
among you–it should be a matter of very proper pride and
Marry it man! Marry it!
Cherish her, she’s your very own.
Coax it man coax it–it’s delicately and ingeniously made
–it’s an instrument of precision–it costs us tax-payers,
money–I want you men to remember that.
Fondle it like a granny–talk to it–consider it as you would
a friend–and when you ground these arms she’s not a rooky’s
gas-pipe for greenhorns to tarnish.
You’ve known her hot and cold.
You would choose her from among many.
You know her by her bias, and by her exact error at 300, and
by the deep scar at the small, by the fair flaw in the grain,
above the lower sling-swivel–
but leave it under the oak.

Slung so, it swings its full weight. With you going blindly on
all paws, it slews its whole length, to hang at your bowed neck
like the Mariner’s white oblation.
You drag past the four bright stones at the turn of Wood
Support.

It is not to be broken on the brown stone under the gracious
tree.
It is not to be hidden under your failing body.
Slung so, it troubles your painful crawling like a fugitive’s
irons.

There is nothing else like David Jones' epic poem of war 'In Parenthesis'.  It was written in 1937, looking back at the horrors of WWI, as WW2 loomed ahead.   David Jones was wounded in the Battle of the Somme, so I thought it appropriate to post a fragment of a much neglected poem just as we are all remembering the anniversary.

David Jones was both a poet and a painter and he was one of the wartime proteges of a wealthy philanthropist called Helen Sutherland who owned a mansion overlooking Lake Ullswater and at various times hosted poets and artists such as Norman Nicholson, Winifred and Ben Nicholson (no relation), Kathleen Raine, Elizabeth Jennings and David Jones.  David was in poor health;  he suffered from 'nerves' and apparently almost had a breakdown over a bottle of spilt ink in the bedroom of Sutherland's dauntingly exquisite house. 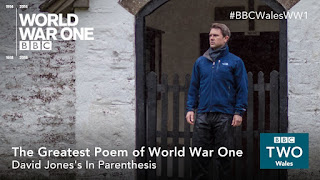 In Parenthesis was broadcast on the BBC Third Programme in 1946.   Recently is has been made into an opera for the Welsh National Opera, broadcast by the BBC, which also made a documentary film about it.  You can just catch it on iPlayer if you click here.   And the poet Owen Sheers made a magical documentary about the poem he calls 'the greatest poem of WWI',  which is also available on iPlayer here.