For the Love of Books

I've had a very busy two or three weeks - flat out with workshops, publisher's deadlines, academic work, and a half term spent with my two youngest grandchildren revising my child-minding skills. There was also a whole day spent on a train (5 hours each way) for a three hour meeting in wildest Wales.   But it was a good week in other ways.

It's not often that the readers of your books write to you and tell you that they liked them, but this week I've had no fewer than four letters or emails saying thank you. Staggering through the door on a wet autumn night with heavy book bags, totally exhausted, with a heap of damp mail clutched with gloves and keys, it gives you a real lift when you find, among the bills, a handwritten letter telling you how your book made someone happy.

As writers we more often have to take the knocks - the one star reviews on Amazon, critical reports from editors and agents, rejections from magazines - and so it's utterly marvelous to hear from a reader whose life you touched.  It's made me realise that, as a reader, I should be more pro-active in letting the author know I rated their book.  I don't get much time for reviewing these days, but I feel I should do more. It's such a wonderful morale booster!  So, thank you to all those fantastic readers who took the time to make my week.  One reader even sent me a photograph of his cat sleeping on the NZ edition of my Katherine Mansfield biography - brilliant!  That cat has taste . . . 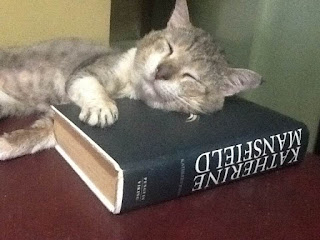