Bears Not Bombs - and other stories

It was wild and it was wet, but that was the weather! No anarchy or water bombs.  One of the biggest demonstrations London has seen, but all went off in an orderly and good-natured way in spite of the storm. I was marching with Greenpeace and had instructions to assemble at Hyde Park Corner before joining the main march on Park Lane.
Everyone had made an effort to be as colourful as possible and there were some very imaginative placards with good slogans including 'Make Love, Not Co2', 'Bears Not Bombs' as well as all the usual environmental quips. There was a lot of fantastic artwork to put my scribbled poster to shame. 'Disgusted of Tonbridge' put in an appearance too. 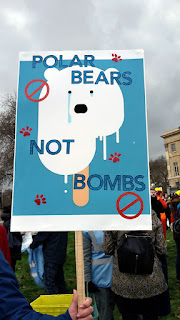 The atmosphere was like a carnival and, with more than fifty thousand people swarming into the park, it felt electric. There were polar bear processions 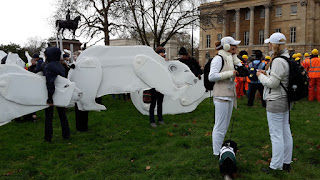 And even people dressed as Polar Bears. 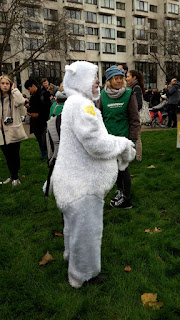 A few zebras put in an appearance too.  Anything was possible. 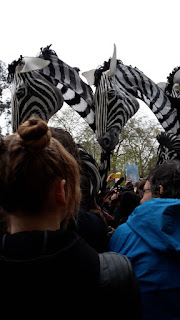 I was lucky enough to be close to the old Fire Brigade Union engine they were using as a platform and able to listen to the speakers. Vivienne Westwood was electrifying (and terrifying!) accusing politicians of being criminals.  A Bangladeshi woman talked about the increasing salination of the land in her home country and how people are finding it hard to grow food.  Flooding is more frequent and in areas where communication is a problem the women have set up a network to warn each other so that their homes can be evacuated as the water rises.  The President of the Royal College of Nurses talked about the strain that climate change will put on the health service. But the star of the show was Jeremy Corbyn who in real life is a wonderful speaker and talks a lot of sense in a very authoritative way.  Climate Change, both now and in the future, is the greatest threat to international security and human well-being.

When I see Labour MPs on TV spitefully accusing him of being a 'rubbish'  leader I now wonder who they are describing.  The roar of tens of thousands of voices yelling approval should reassure them that he is doing the job he was elected to do. 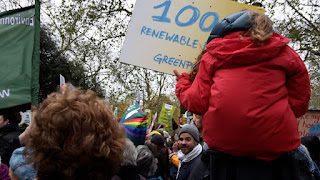 The diversity of the crowd was amazing. There were representatives of local councils from all over Britain, trade unions, the Royal College of Nursing, a lot of doctors, as well as environmental groups such as Save the Trees, Woodland Trust, Friends of the Earth, Avaaz, 38 Degrees, Christians, Muslims, Buddhists, Druids, Ban Bombs, Ban Fracking, MPs of every political persuasion, but, tellingly, NOT A SINGLE CONSERVATIVE.  You might have expected that someone from the department of the environment might have come along to explain their intentions in Paris? Especially as they claim on their website . . . "We are the UK government department responsible for safeguarding our natural environment, supporting our world . . . Our broad remit means we play a major role in people's day-to-day life, from the food we eat, and the air we breathe, to the water we drink."  Their absence doesn't bode well for Paris.

There were also quite a few French people in the crowd, unable to protest in Paris.  Others were marching for French friends, with their names taped to their jackets.  In Paris thousands of shoes were arranged in the Place de la Republique to represent the people who wanted to march, but were forbidden to do so.  It is one of the most moving images I've seen. 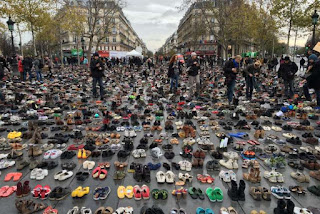 It took me hours and hours to get home because the storms had blown trees across the railway tracks and brought down power lines.  Virgin Trains finally sent me to my destination with a small group of other travellers in a mini-bus. It was a fantastic day, and there was also the feeling that one was doing something  - even if only being one small voice in a huge crowd - but also the comfort of feeling part of a movement. As Caroline Lucas said in her speech, 'To change everything, you need everyone'.