The lost villages - and people - of Haida Gwaii

The Haida refer to it as 'The Great Dying';  an epidemic of small pox, brought by the Europeans, that in 1862 wiped out whole communities, particularly on the southern islands of the Gwaii.  One of my goals in coming here was to try to get to some of these abandoned villages.  The southern part of Haida Gwaii is now a nature reserve and, apart from a small airstrip and village at the top of Moresby Island, is not inhabited at all.  I drove down the east coast of the northern island to the township of Skidegate and immediately started asking how I could get into the south.  The BandB I was staying in said that they were taking a group by boat the following day and would I like to join them?  Would I! The weather wasn't good, but it would have taken a small army to keep me from going! 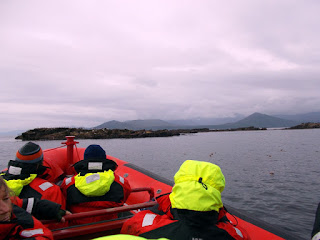 We went out in a Zodiac, all kitted out in waterproofs and flotation jackets, with a Haida crew, for a ride that was about 2 hours or more south in the turbulent waters of Hecate Strait, heading for Skedans - whose Haida name is K'aanu.  So many people died here at one time that there was no one left to bury the dead and no one else dared approach the island in case of infection.  Even today, visitors to the island come across bones on the forest floor that have to be reverently covered over. 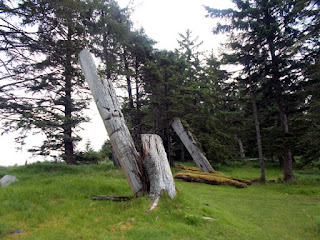 These villages are heritage sites and you can't go unaccompanied.  There are watchmen at every location - young people who volunteer for 2 week shifts, without any kind of mod cons, in a hut, to guard their history.  At Skedans it was two girls.  They said they weren't afraid of the bears or the storms, but had found the 'powerful energy' of the place very hard to get used to.
One of the Haida men who had come on the boat was the son of a hereditary chief of the clan and he told us his childhood memories and how his father had often brought him back there on camping trips, showing him the old places and telling him the stories of his clan.  He was able to tell us what each of the House Poles meant and who had lived in the various houses, now collapsed.
The poles are all precarious and rotting now - the thought is that in 20 years none of them will be there, so I am very privileged to have seen them at all. The air was full of the sound of woodpeckers drilling the wood.
Jags told us that when he came with his father they often found caves where families had hidden their possessions, packed in cedar wood boxes, still intact, and once they had found a shaman's carved staff wedged in between rocks in the roof. All these objects are now in the  museum.

The Haida survivors grouped together in smaller and smaller communities until only two main groups were left, at Masset and Skidegate on the north island.  By 1900 a population of almost 30,000 had been reduced to around 500.
It was an exceptionally beautiful and lonely place.  I found it very moving, just to be there.  The return journey was more challenging - against a flood tide with a strong southerly wind in opposition. Arrived back in port wind-blown, wet, but strangely happy.