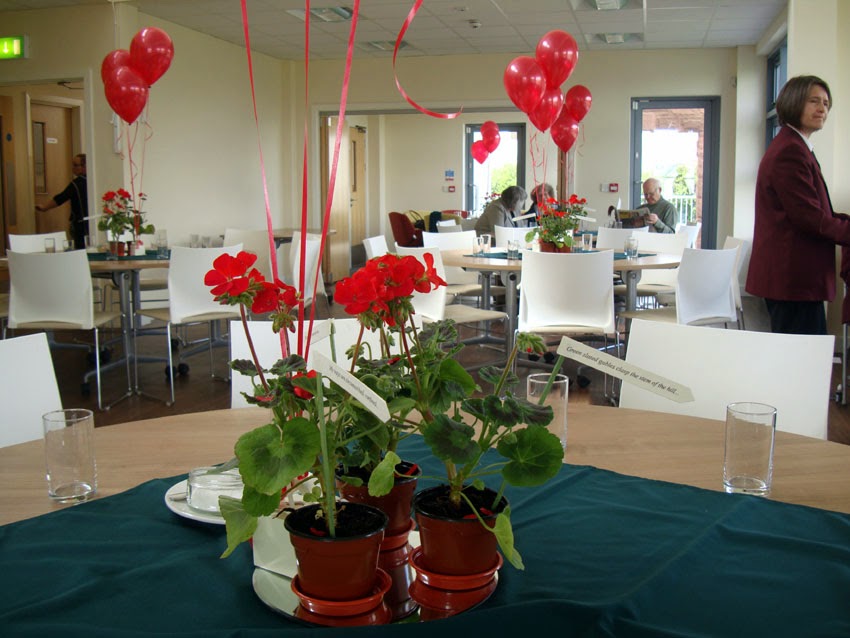 THE POT GERANIUM
By Norman Nicholson

Green slated gables clasp the stem of the hill
In the lemony autumn sun; an acid wind
Dissolves the leaf stalks of back garden trees,
And chimneys with their fires unlit
Seem yet to puff a yellow smoke of poplars.
Freestone is brown as bark, and the model bakery
That once was a Primitive Methodist Chapel
Lifts its cornice against the sky.
And now, like a flight of racing pigeons
Slipped from their basket in the station yard,
A box kite rides the air, a square of calico,
Crimson as the cornets of the Royal Temperance Band
When they brass up the wind in marching.  The kite
Strains and struggles on its leash, and unseen boys,
In chicken run or allotment or by the side
Of the old quarry full to the gullet with water,
Pay out on their string a rag of dream,
High as the Jubilee flagpole.

I turn from the window
(Letting the bobbins of autumn wind up the swallows)
And lie on my bed.  The ceiling
Slopes over like a tent, and white walls
Wrap themselves round me, leaving only
A flap for the light to blow through.  Thighs and spine
Are clamped to the mattress and looping springs
Twine round my chest and hold me.  I feel the air
Move on my face like spiders, see the light
Slide across the plaster; but wind and sun
Are mine no longer, nor have I kite to claim them,
Or string to fish the clouds.  But there on a shelf
In the warm corner of my dormer window
A pot geranium flies its bright balloon,
Nor can the festering hot-house of the tropics
Breed a tenser crimson; for this crock of soil,
Six inch deep by four across,
Contains the pattern, the prod and pulse of life,
Complete as the Nile or the Niger.

And what need therefore
To stretch for the straining kite? – for kite and flower
Bloom in my room for ever; the light that lifts them
Shines in my own eyes, and my body’s warmth
Hatches their red in my veins.  It is the Gulf Stream
That rains down the chimney, making the soot spit; it is the Trade Wind
That blows in the draught under the bedroom door.
My ways are circumscribed, confined as a limpet
To one small radius of rock; yet
I eat the equator, breathe the sky, and carry
The great white sun in the dirt of my finger nails.


As it's Norman's centenary and this week there are lots of events and celebrations, I thought I'd post what he considered was his 'signature' poem.  It is a meditation on confinement - because he was diagnosed with TB as a teenager, he spent a lot of time cooped up in small rooms gazing at the outside world he couldn't explore.  He lived all his life at 14 St George's Terrace, Millom, in the small attic room described above, with its views of the Lake District fells and the roofs of the town.  He was adamant that his work was universal and not 'provincial'.  What is local and personal is relevant to the whole human race.  Wherever we are we 'eat the equator, breathe the sky, and carry/The great white sun' under our fingernails.

Why not pop over to the Tuesday Poem hub and see what the other Tuesday Poets are posting?

If anyone is interested in reading more about Norman, The Whispering Poet is available as an ebook and a print book from Amazon and from all good bookshops.

And for anyone living in the NW of England, Lancaster University are hosting an event on the 30th April, 6-8 pm in the Alexandra Gallery.  A celebration of the life and work of Norman Nicholson.