I'm finally back in Italy after a very hectic couple of weeks visiting children, grandchildren, doing interviews for the book, and trying to straighten things out at the mill.  The garden looked more like a field - 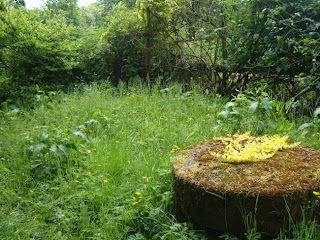 Not surprising with all the rain that they've had in the north.  And the river was rolling merrily along, full and brown and lively and very un-summery.  From the amount of mud on the cobbles and the grass, it has recently been flooded up to the front doorstep. 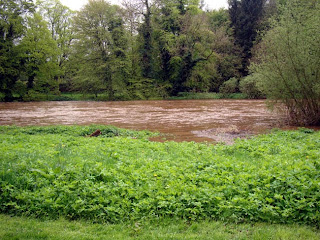 Between strimming the grass and dashing off to do the last interviews for the Norman Nicholson biography I haven't had much time for the internet.  Most of that has been mopped up by the first interactive Life-Writing Workshop put on by the Edinburgh E-book Festival.  I've got a group of very enthusiastic and talented writers reading the workshops and doing the exercises and I'm pledged to supply feedback online after every one.  It's been great fun and some beautiful stories have emerged.

While I've been at home, I've been watching the progress of my midnight cactus.  It had bloomed six times while I was away, which grieved me a lot, since it flowers only occasionally and is really spectacular when it does. I sadly threw away the withered stalks.  Then, I noticed that two other buds were forming, but I was pessimistic about the chances of my still being there when they opened.  But, at 11.30pm on my last night, they magically bloomed.  This is what they looked like the following morning: 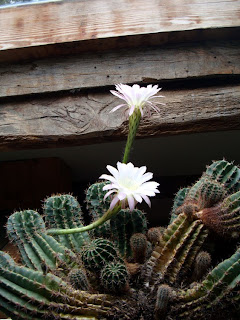 They are several inches across, tinged with lavender and smell of vanilla.  Utterly beautiful.  But in the morning I had to pick up my suitcase and leave. 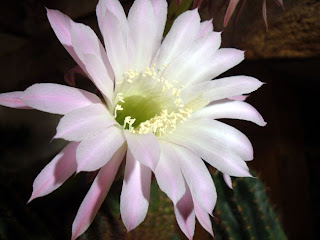