Creative Writing slams in the Piazza - and shoes!

One of the features of the literature festival, which ended last night, was a creative writing slam on the big stage in the piazza.  A group of students read their work over the microphone, critiqued each other and then voted a winner. I'm not sure I'd ever have had the courage to allow my work to be criticised so publicly.  They were a very lively group, but my Italian wasn't good enough to judge the stories and poems being read out. 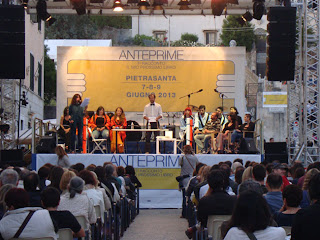 The atmosphere on a Sunday afternoon and early evening is always buzzing - it's the 'passagiata' - where everyone puts on their best clothes and wanders around saying hello to everyone else.  It's the perfect opportunity for people watching.  And shoe spotting.  Italy has some of the most amazing shoes in the world and they're worn with flair.  Here's two pairs that caught my eye. 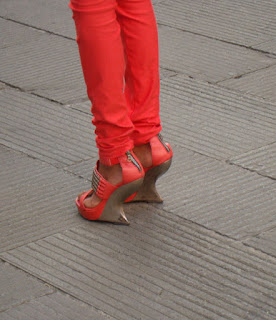 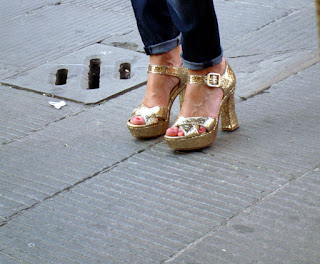 Handbag dogs are always on display too - they're called handbag dogs because they're very small and often to be seen tucked into a handbag on someone's shoulder.  They don't walk!  This one was occupying a bar seat and had its own little dish to drink out of. 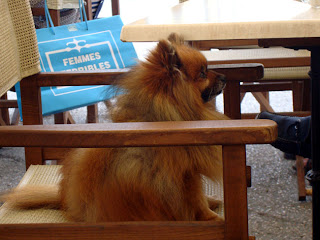 And finally, the Piazza wouldn't be the same without the characters who live on the street.  This is the Tibetan, dressed in full Tibetan costume and playing strange instruments.  He used to have a dog and a rabbit in a cage, but the animal welfare took them away.  He's probably not Tibetan at all, - his story varies depending on the listener. Sometimes it was his wife who came from Tibet, sometimes he just visited, sometimes he came from Tibet.  Whatever it is, his soul is obviously in the high mountains of the Himalayas. 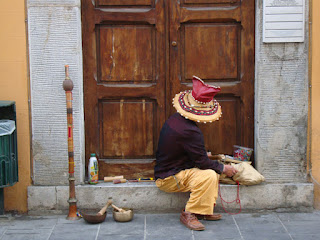