Pietrasanta and the Anti-art Movement 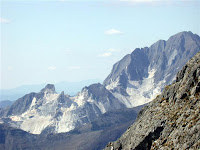 The small town of Pietrasanta (the name means sainted or blessed stone) has been at the heart of the marble industry in Italy for more than two thousand years. The five thousand foot mountains that surround the town have been chiselled away by centuries of intrepid quarrymen and from a distance you can see glaciers of glittering marble waste slithering down gullies towards the valley floor. On the precipitous roads, marble lorries thunder past like mobile earthquakes, leaving a drifting fog of white dust behind them.

You can still climb up to the quarry where Michael Angelo found the block from which he carved David. You can still see the old building where he may or may not have stayed while he was here. Pietrasanta lives off the sculpture industry and there are also several foundries where sculptors from all over the world come to get their work cast into bronze. 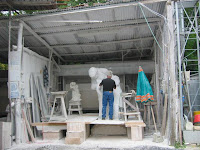 Henry Moore had much of his work cast here, as did Noguchi, and now Barry Flanagan, Kan, Bottero and Mitoraj all have work standing in the yards. The infamous statue of Saddam Hussein started out here too.

Residents of Pietrasanta are descended from generation after generation of artigiani, skilled at realising the work of others and turning plaster or terracotta maquettes into life-size works of art. The Anti-Art Movement, which began with Dada, wants to leave the traditions of the past behind and deconstruct all our notions of art. It too, is alive and well in Pietrasanta.


I’ve just been to the opening of an exhibition of Antonio Luchinelli’s work. He is on 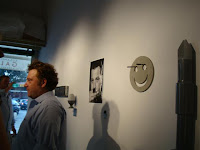 e of those who can trace their ancestry back through the artigiani and he is best known for making moulds for the world-famous Kan. Antonio is a skilled mould-maker - meticulously reproducing whatever he’s given. This exhibition of his own work - a statement of his personal espousal of ‘Anti Art’ - is a series of pieces linked by a play on words, though I have to confess that I couldn’t engage with it at all, even when the linguistics were explained to me.

But then I’m on the side of art - with or without the capital letter - and I don’t believe it needs to be elitist - anyone can do it on any level, like writing. But I also believe that some people can do it better than others. I know I’m making a qualitative judgement when I say that; I know that everyone is entitled to read or look at whatever gives them pleasure, but - in my opinion - there is a lot of crap out there fetching huge sums of money. And there are an awful lot of people, in art and anti-art, who share the Emperor’s tailor.
Labels: Alpe Apuane art Pietrasanta sculpture