Sojourner Truth: One of our forgotten 'Mothers'.

Today is the anniversary of the death of the woman we know as Sojourner Truth. She was born as Isabelle ‘Belle’ Baumfree in New York State. Her parents were slaves and her first language was Dutch. She was sold at the age of nine with a flock of sheep to another owner who ill-treated her. She was sold again, at least twice, finally to an owner who raped her, as was common practice at the time. As a result she gave birth to two children – a boy who died in childhood and a girl called Diana. The man she loved, also a slave, was savagely beaten by his owner when they were discovered together and he died shortly afterwards. Marriage to another slave produced three children, before ‘Belle’ ‘walked away’ in her words, with her youngest child, and was taken in by an abolitionist family in New York, the Van Wagenens, who kept her until the Emancipation Act became law and she could be officially freed. 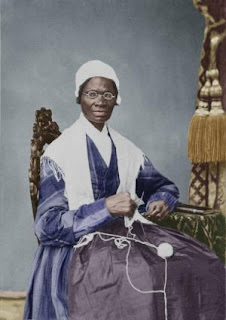 Meanwhile her previous owner had sold her son Peter at the age of five to a family in Alabama. Belle sued to get him back, in 1828, with the help of her protectors, and was the first woman of colour to win a case against a white man. Peter had been badly abused by his owners. In 1842 he sailed in a whaler from Nantucket. Belle received two letters from him, but when the ship returned to port, Peter had disappeared. The loss of her second son affected her deeply.
Belle had become an evangelical Christian while living with the Van Wagenens and in 1843 became a Methodist, claiming that God had instructed her to go out into the countryside to preach the truth and campaign against slavery. She changed her name to Sojourner Truth. At almost six feet tall, she was an imposing figure with an air of calm and strength that impressed everyone she met. Her preaching and singing attracted large crowds wherever she went. In 1850 she dictated a memoir to friends, and it was published as The Narrative of Sojourner Truth: a Northern Slave. 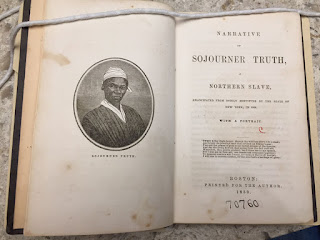 In 1851 she attended the Ohio Women’s Rights Convention, giving the speech we now know as ‘Ain’t I a Woman?’ In it she argued passionately for rights for all women regardless of colour. Unable to read or write, Truth spoke extempore, and various versions of her speech were published afterwards, some of them in a southern dialect quite alien to Truth, who was a New Yorker and spoke English with a Dutch accent. Slavery was often seen as a southern issue. She was also credited with thirteen children in some versions, rather than the five she herself claimed. But, whatever the details, the content of the speech electrified all who heard it and was an inspiration for second wave feminists and anti-apartheid activists in the 20th century.
“That man over there says that women need to be helped into carriages, and lifted over ditches, and to have the best place everywhere. Nobody ever helps me into carriages, or over mud-puddles, or gives me any best place! And ain't I a woman? Look at me! Look at my arm! I have ploughed and planted, and gathered into barns, and no man could head me! And ain't I a woman? I could work as much and eat as much as a man – when I could get it – and bear the lash as well! And ain’t I a woman? I have borne children, and seen most all sold off to slavery, and when I cried out with my mother's grief, none but Jesus heard me! And ain't I a woman?”
If you’d like to know more about her original speech click here: https://www.thesojournertruthproject.com/ 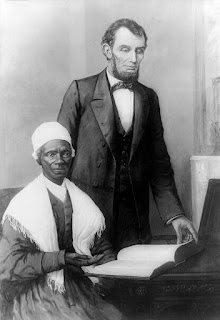 Her activism brought her into contact with Harriet Beecher Stowe and Abraham Lincoln. She is reported to have ridden the streetcars in Washington to protest at their segregation, making a precedent for 20th century Rosa Parks. Truth lived in Battle Creek, Michigan with her daughter Elizabeth until her death in 1883, campaigning for social justice until the end. Her funeral attracted almost a thousand mourners. She was the first black woman to have her bust placed in the US Capitol building, Washington, in 2009. Another statue appears in Central Park NY. 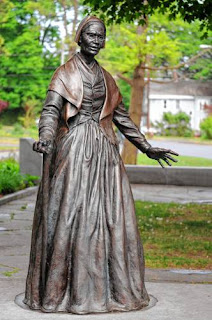 If you would like to know more, there’s a very comprehensive account of her life and achievements on Wikipedia https://en.wikipedia.org/wiki/Sojourner_Truth
Labels: Black Lives Matter Role Models Rosa Parks Sojourner Truth US Emancipation women's suffrage