The introduction to Debasish Lahiri’s collection has been written by Mansfield scholar, editor and TLS critic Gerri Kimber, who describes it as ‘a confident, animated collection of poems . . . deeply rooted in Western classical mythology, whilst at the same time reflecting his Indian roots’.

This is a very unusual combination, but if we are surprised by it, then that reflects attitudes we need to examine. As Debasish says, in his interview below: “In a world that is seemingly cosmopolitan writers should have the freedom to write about any subject or idea under the sun and not be limited by the colour of their skin or the stamp on their passport. A writer from India need not only write about things Indian.” Instead of advancing towards multi-culturalism we seem to be stepping backwards at the moment, reinforcing cultural and national boundaries.

Debasish speaks five languages and his poems have also been translated into French. The influence of France is very prominent in the collection, which contains poems dedicated to Paul Celan, and others inspired by Cezanne, Monet and Van Gogh. One of Gerri’s favourite poems is also one of mine. It’s called ‘Colours by Rain’ and describes a journey that Debasish made to Van Gogh country at Auver-sur-Oise.

On a morning,
Like today,
When the sky brooding on itself
Had forgotten its own colours,
Moved by a painter’s question,
A man had found them:
Colours,
Huddled into a navel of quiet,
All the colours that had escaped
The sky’s palette. 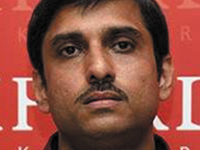 I didn’t always find this poetry easy. I’m not a fan of capitalisation at the beginning of the line and the detailed references to classical mythology stretched my own understanding of the Greek myths to the limit and had me reaching for the Dictionary of Mythology. I sometimes found the mix of Indian and Western mythologies confusing. But there is some fine poetry, as in ‘a blind blacksmith/Forges stars on this page/That I cannot see.’  And ‘Look at what blood does to us./ In giving us life/ It kills us by saying/ That time is soon gone.’ In another poem, I’m taken straight to the Bazaars of Hyderabad and one of those spine-tingling moments I recognise from my own time in the east:
Suddenly a muezzin calls to prayer
The very air of the place.
A cannonade of startled pigeons
Bursts through the thin indifference
I had carried into the square.

Debasish lectures in English at Lalbaba College, affiliated to the University of Calcutta, and received the Naji Naaman merit literary prize in 2019. Poppies in the Post has also been reviewed in Academia magazine.

An Unsent Letter
(For Paul Celan)
To reply,
Verb;
To write,
Verb:
Actions that perform
The true rites
Of my passage
Through this Paris of secrets well-lost;
The pain of disclosures
Surmounted by an idle rain
Like a café offering its summer munificence.
Why should I write beautiful lines in this city?
Will the chestnut bloom twice if I do?
Autumn always calls once
And Provencal bees do not storm summer
On Rue de Luxembourg.
This is another hum,
And traffic loiters in awe of it.
Death-beetle summer,
Summon your autumn Elysium.
To write,
Verb,
To scratch the itch of tears,
Now dry,
To remember,
Verbs too.
Shall I send poppies in the post?

I asked Debasish 10 questions about his work, which he was kind enough to answer.

1. Tell me a little about yourself - where were you born and brought up?

I was born and brought up in the suburbs of Kolkata, a city with a distinct colonial identity and a pronounced Anglophilia. From kindergarten onwards I was admitted to the Don Bosco school, an institution run by a Catholic order called Society of Saint Francis de Sales or the Salesians. Being there for twelve years has been a vital shaping influence in my life.

2. How did you start writing?

My first, albeit slightly confused, steps in writing were taken in school when I was in the seventh standard. Heavily influenced by the poets prescribed in the syllabus I got it into my head that all writing had to be chiselled out on paper in the shape of a structured poem. I started this somewhat bizarre experiment with my student essays much to the mystification and often ire of my teachers. I think it was bizarre for them, not for me, because I quite enjoyed it.

Any way, transgressions like this piled up and I was brought to, what seemed at the time to be a trial, before our rector Fr. Patrick Sheehy. Grades had been suffering and everyone was rather concerned. To my great surprise, and also relief, Fr. Sheehy did not chide me. The benign Irish rector who never raised his voice above a soft whisper was grandfatherly. He weaned me away from my experiments but only by offering me another avenue: to write as I pleased and to bring it to him for his scrutiny. Besides he opened the doors to his personal library every weekday for my use. That's where I discovered the poets.

3. What brought you to poetry?

It took me till my eleventh standard in school to realise that what I was writing was mostly poetry, mostly bad poetry. I say bad because that was a long apprenticeship in words, in structure, in the sound of, in the fall of the notes of poetry; an apprenticeship that was clumsy and imitative at the best of times. It was perhaps around that time that I also realised that mere structure on a page was not something that was tantamount to poetry: there was the voice and the content, the idea or an insight that was necessary for a scribble to become poetry. Frankly, most of what I was writing by the time I finished school and went to college was, looking back, in speech rhythm, a half-dramatic, half-confessional set of monologues. Poetry was for me a way of living and engaging with the society, with the world around me, without really doing so. I was, and still am, very much an introvert by nature.

4. How many languages do you speak?

I can speak in English, in Hindi and Urdu, and Bengali of course, it being my mother-tongue. My French is very halting, sadly.

5. How difficult is it to write in another language?

In fact, it was quite easy to write in English for me, almost inevitable. Let me explain. I have already said that Kolkata - Calcutta - as it was spelt earlier, had an ingrained Anglophone culture thanks to its establishment and provenance by British colonial fiat. In my own house English was a language I had heard spoken from my earliest childhood. My father was very comfortable in the language and I grew up happily bilingual. In school English was accentuated. So when it came to choosing a language in terms of writing, English was a natural choice. And never did I feel afterwards that I had abandoned Bengali in favour of English: there was no guilt.

6. Which authors do you like reading?  Have you a favourite book?

7. Who are your biggest influences?

In life my biggest influences have been my parents, and next to them Fr. Sheehy, and my English teachers in school Mr. Diaz and Mr. Allaphad.

In my poetry Keats, Eliot and Larkin have been strongest as influences. Later the Russian poets, Akhmatova, Pasternak and Mandelstam along with Neruda have been shaping and inspiring presence. Further, I cannot but acknowledge the role played by Keki Daruwalla as a mentor and inspiration in my early years as a poet.

8. You draw from a number of mythologies; what fascinates you about our cultural contexts and the mythical landscapes we inhabit?

I have always held that mythologies are merely powerful imaginative projections of situations we encounter in daily life. I read mythology as archetypes of the everyday that we can invoke, access and enter into organically a myriad number of times without affecting its original freshness and appeal. That is why I use myths, western and oriental in my poetry, not as stilts, but as natural outcrops of language, situation and emotion. A rose that bloomed in an Athenian garden in the 5th century is the same rose that bloomed in the garden of a Mughal Emperor in the 16th century and is the same rose that blooms in my neighbour's garden nigh. It is the same rose, but it is also different. I use myth, like the rather bruised-by-overuse metaphor of the rose, that I have outlined.

The nature myths and the myths of resilient figures in western mythology attracts me particularly as I feel one aspect of the appreciation of beauty is the strength and patience to endure. The one prized moment of rapture in the presence of the beautiful is presaged by privation, suffering and long silence.

9. Is there anything else you want to say?

No tall claims, or oracular statements. Just this: In a world that is seemingly cosmopolitan writers should have the freedom to write about any subject or idea under the sun and not be limited by the colour of their skin or the stamp on their passport. A writer from India need not only write about things Indian. He/She could as well choose to write about Roman Britain, or Italy during the Great War or anything else for that matter as long as a sense of authenticity and regard for cultural specificity colours every act of imagination. - It is often the case that publishers also discriminate between writers of different countries writing in English. If I try a British publisher with a manuscript of poetry in English without an obvious British connection, I will be asked to try an Indian publisher. Whereas an Indian publisher can and often do tell me to find European avenues because my poetry is too western. My poems are strewn with references to both oriental and occidental mythologies and realities, where then do I pitch my poems? - Just the travails of writing in a world that swears by cosmopolitanism.

10. What are you working on at the moment?

Here's the catch. I've finished putting together a short collection of poems on the lives of common-folk in Roman Britain. A British Publisher will be bringing it out in 2021.

Additionally, I've just finished writing forty poems on Miniature Paintings from India, from the 11th to the 17th centuries which I hope will form a collection in the near future.

Thank you so much for asking me these questions and allowing me to open up on some aspects of my writing.