Rosley was the most normal part of my childhood. We lived in a house like other people’s, and had electricity and running water. There were abundant Christmas and birthday presents because my parents were now in a position to be able to afford things. Dad, as a farm manager, was paid a very good wage. There were new clothes in the wardrobe, a modern three piece suite in the drawing room and a carpet. They were buying Mozart’s Eine Kleine Nachtmusik in instalments, one 78 record at a time, at the end of every month. But most of the money was put into a savings account towards the deposit on a farm of their own. My father was a man in a hurry and he had no intention of spending his life working for someone else. He didn’t have the temperament for it. There was constant friction. My mother would sigh and say, ‘He won’t let anyone be the boss of him’, and it was true.

The family with Shire horse, at Low Ling
It was through the chapel that we met the Routledges, four elderly brothers and a sister who lived on a neighbouring farm, never to be seen except on Sundays. Neighbours said that they were very reclusive and if you met them they rarely spoke to you. I was fascinated by their farmhouse, which was a sturdy, black and white, traditional Lake District house set in a beautiful cottage garden. Tom was one of the younger brothers, a lean, craggy man with a face creased and brown from the weather. When he smiled, which was often, you could see that he had a mouthful of rotten teeth. To sweeten his breath he sucked extra strong mints, and kept several packets in his coat pocket which were liberally offered to everyone he met. He came to the local chapel and became my father’s groupie, cycling to wherever he was preaching.
Soon he was cycling down to Low Ling in the evenings for a ‘bit of crack’, bringing a bunch of flowers from the garden for my mother. It became obvious that he had, what my parents called, ‘taken a shine’ to her. No one mentioned the word love. I remember those evenings, sitting by the fire, in awkward silence once the initial pleasantries had been exhausted. Tom was no conversationalist. Every now and then the stillness would be punctuated by an indrawn breath and an ‘Aye’, that could have meant anything. My parents dreaded the visits, because they couldn’t read books or listen to the radio while he was there, and attempts at talking were strained. Eventually, after a couple of hours and the consumption of tea and cake, Tom would get up and say ‘Better be off’, put on his overcoat – a brown dog-tooth wool affair that he wore winter and summer – slip on his bicycle clips and step out into the night. 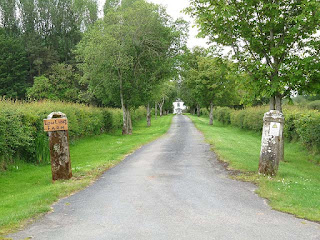 We were honoured to be invited to the house for tea. It was a journey into a previous century – nothing had changed since the Routledge parents had furnished it when they married decades earlier. There were flagged floors with rag rugs and a gigantic grandfather clock in the hallway. The interior was dark because there was no electricity and there were candle sconces on all the walls. The rooms were papered in old fashioned floral prints in greens and reds, darkened by decades of paraffin fumes and candle smoke. There were heavy velvet curtains in medieval red, and the furniture was Victorian mahogany the colour and sheen of chestnuts. It had the kind of patina that only generations of polish can produce. There were table covers of chenille, and glass lamps in blues and greens with painted glass shades. Above the fireplace a text embroidered in cross stitch announced: ‘Christ is the Head of this House, the Unseen Guest at Every Meal’. 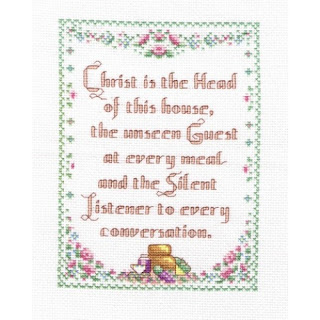 We were introduced by Tom to his sister, Ginny, a thin, stooped woman in an overall, with grey wispy hair drawn back into a bun. She avoided our eyes, whispered hello in a voice that could barely be heard and beckoned my mother and I towards the sitting room door. Inside, the curtains were drawn and it was as dark as a cave, lit only by a fire in the grate, although it was August. Beside the fire in an upholstered, spindle-back rocking chair, was a woman so ancient I wondered if she was real. Mrs Routledge was dressed as I’d seen pictures of old Queen Victoria, in a full-length black dress trimmed with buttons and frills and a black satin cap on her head. The room was full of the scent of decay, as she held out a shaking hand to greet us. We were given tea round the kitchen table with the brothers. It was a silent affair, apart from my parents’ attempts at conversation. Ginny didn’t sit down with us, but ran round slicing home-made bread, putting out home-cured ham with beetroot jelly, scones and cakes, making tea in an antique silver service. She looked at me nervously as she put down a slice of apple cake and smiled a quick shy smile that seemed almost to escape from her mouth against her will.
Gradually, as Tom gained confidence in us, their story began to emerge. Their parents had been extreme non-conformists in some small sect. Methodism was deemed to be too liberal. The only book they had been allowed to read was the bible. Once, when Ginny won Alice in Wonderland as a prize at school her father put it on the fire as the work of the devil. The only time they were allowed to go anywhere was to religious worship. In her thirties, Ginny had once had a boyfriend she’d met when she went to the market to buy groceries, and she used to sneak out of the house to meet him on the main road, where they walked up and down for half an hour before she ran back home. When her father found out what was happening it was stopped. It broke her heart, Tom said.
Only their eldest brother had escaped. He had thumbed a lift on a wagon and gone south. He’d sent a letter to say he was in Oxfordshire, working on a farm and wouldn’t be coming back. Although their father had been dead ten years, nothing had changed. They still had no electricity or telephone, or any other modern conveniences. His stern influence was as thick as woodsmoke within those four walls and their mother, slowly fading in the sitting room, still feared and respected, like a spider at the centre of a web. 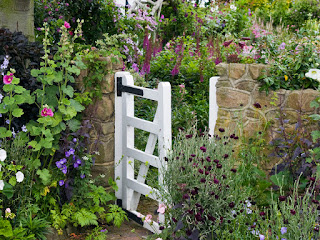 I often wandered up to the farm on fine days and Ginny would pat my head and give me tea and cake and let me chatter. Tom would take me out into the garden, which I quickly realised was his special place. He grew sweet peas, lupins, sweet william and enormous dahlias.  It was a traditional cottage garden with white lilac and purple lilac by the gate, peonies and alchemilla on either side of the path and, against the wall, roses as big as mop heads, buzzing with bees. He would go into the greenhouse and give me strawberries, or raspberries – whatever was in season – to take home to my mother.
My Aunt Nancy had just given me The Secret Garden to read, and Tom’s garden was everything I’d imagined a garden should be. Neither of my parents were gardeners; they had neither the time nor the energy. The garden at Low Ling was waist high with unmown grass. The conservatory remained empty, the gardening equivalent of Miss Haversham’s sitting room with stacks of cracked pots, a few weeds struggling up through the staging, rusting tools, and shawls of cobweb everywhere. It smelt rank, the scent of a rogue shrub that had shouldered its way between the wall and the frame.
Labels: memoir Reading My Mother