Les Murray died yesterday, aged 80. He was an Australian poet with a global reach, a colossus - utterly original, profound and always humane. 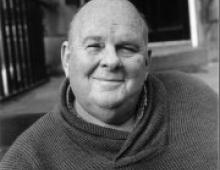 Brought up on his grandparent's farm in Bunyah, New South Wales, he had a tough redneck childhood in a family with little money. An only child, solitary, overweight, and misunderstood, he was often thrashed by his father and bullied at school. When he was 12 his mother bled to death during a miscarriage.  As an adult, university educated, he struggled with depression, but his poetry earned every major award that could be given on both sides of the planet, including the TS Eliot prize and the Queen's Gold Medal for poetry.  My favourite poem of his is a wry look at Australian life called 'The Quality of Sprawl'.  It's quite long, but these are some of the verses that always makes me laugh, based on true stories.

Sprawl is the quality
of the man who cut down his Rolls-Royce
into a farm utility truck, and sprawl
is what the company lacked when it made repeated efforts
to buy the vehicle back and repair its image.

Sprawl is doing your farm work by aeroplane, roughly,
or driving a hitchhiker that extra hundred miles home.
It is the rococo of being your own still centre.
It is never lighting cigars with ten dollar notes:
that's idiot ostentation and murder of starving people.
Nor can it be bought with the ash of million dollar deeds.

Sprawl lengthens the legs; it trains greyhounds on liver and beer.
Sprawl almost never says, Why not? with palms comically raised
nor can it be dressed for, not even in running shoes worn
with mink and a nose ring. That is Society. That's Style.
Sprawl is more like the thirteenth banana in a dozen
or anyway the fourteenth.  . . .


. . .  sprawl is full gloss murals on a council-house wall.
Sprawl leans on things. It is loose-limbed in its mind.
Reprimanded and dismissed,
it listens with a grin and one boot up on the rail
of possibility. It may have to leave the Earth.
Being roughly Christian, it scratches the other cheek
And thinks it unlikely. Though people have been shot for sprawl.


The Quality of Sprawl is also the title of a series of essays on life, politics and poetry.  Sprawl was a quality that Les Murray had in abundance. He wrote about old age with the same wry wit and self-deprecation he approached everything.  This is Vertigo, first published in Poetry, June 2014.

Last time I fell in a shower room
I bled like a tumbril dandy
and the hotel longed to be rid of me.
Taken to the town clinic, I
described how I tripped on a steel rim
and found my head in the wardrobe.
Scalp-sewn and knotted and flagged
I thanked the Frau Doktor and fled,
wishing the grab-bar of age might
be bolted to all civilization
and thinking of Rome’s eighth hill
heaped up out of broken amphorae.

When, anytime after sixty,
or anytime before, you stumble
over two stairs and club your forehead
on rake or hoe, bricks or fuel-drums,
that’s the time to call the purveyor
of steel pipe and indoor railings,
and soon you’ll be grasping up landings
having left your balance in the car
from which please God you’ll never
see the launchway of tires off a brink.
Later comes the sunny day when
street detail whitens blindly to mauve

and people hurry you, or wait, quiet.

I heard him read twice, both times memorable.  He also talked about poetry and said that he saw language in poems as 'feral' - words that would run off into the undergrowth and develop a life of their own.  That image has stayed with me.  Feral poetry, Murray says, is the superior kind. (check out his lecture In Defence of Poetry) . Les Murray was always very political (he was once asked to write the preamble to the Australian Constitution) and a passionate environmentalist. One short poem in particular, sums up the qualities of the poet.  It's called 'The Meaning of Existence'.

Everything except language
knows the meaning of existence.
Trees, planets, rivers, time
know nothing else. They express it
moment by moment as the universe.

Even this fool of a body
lives it in part, and would
have full dignity within it
but for the ignorant freedom
of my talking mind.

I felt very sad this morning when I heard the news. We have lost one of the truly great poets of the last century.