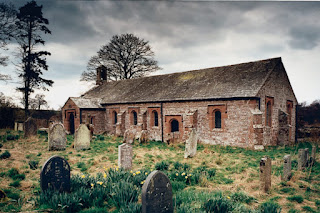 Living in a new place means exploring new routes.  I miss the river, but the same river runs near where I live now and there are beautiful walks along its banks.  A place I've always wanted to go to, but somehow never did, is Nine Kirks.  So, recently, I went walking with Neil in search of this isolated ancient chapel standing on the flood plain of the river, in the middle of nowhere. The setting is incredibly beautiful on an early spring day with the wind blowing the clouds overhead and daffodils just springing up in the hedgerows. As you walk, the Lake District fells rise on one side and the Pennines on the other.

Nine Kirks is very old and it's Grade 1 listed.  The present church was rebuilt/restored by Lady Anne Clifford in the 17th century and has lovely Tudor carvings.  The previous church was medieval - probably Norman - and there was another church before that, possibly Anglo Saxon. Before that, the site was venerated by older religions.  Coins dug up on the site date back to the Romans (there was a fort nearby) and other artifacts show that the site has been used by human beings since the Bronze Age.

The chapel stands alone in a flood meadow surrounded on 3 sides by a gigantic meander of the river Eamont, just before it joins the Eden at Watersmeet.  It seems a strange place to build a place of worship - so difficult to get to and so far from any habitation. But that's only until you realise that this flood plain was once a thriving community of farmers.  The village was razed to the ground, and the inhabitants evicted, by a local Earl so that he could use the land for hunting, fishing and shooting. Things don't change much!

The name Nine Kirks is apparently a corruption of St Ninian's - dedicated to the saint supposed to have founded it. He was an 8th century Christian who originated in southern Scotland - so relatively local.

The small graveyard surrounding the chapel contains graves going back to the 17th century and has a ruined outbuilding containing hitching rings for the horses that used to bring the congregation to services.  Inside, there are oak pews and wonderful carvings.


If you lift a trapdoor in the floor, there is another carved floor beneath, from one of the older churches.  It was too dark to take photos underneath, but elsewhere, the newer stone floor had several old inscriptions. Many of them relate to the Brougham family, who, like the Earls of Thanet (Anne Clifford's relations) were the local gentry who worshipped here and often provided their sons as priests. 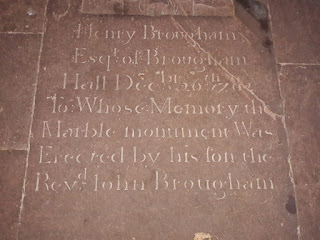 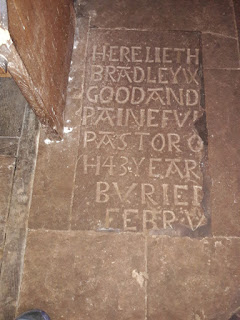 At the back there's also a medieval vestment chest, too large and heavy to move. 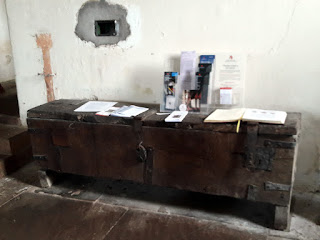 The simple altar has a carved board with the Lord's Prayer, the Ten Commandments and the Creed on it, so that the congregation could read it without having to have prayer books. 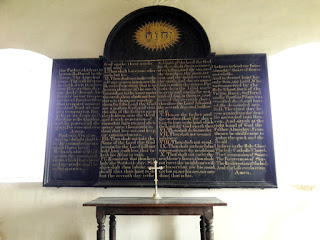 Only one stained glass window remains, with the inscription, 'Jesus Wept', which made me laugh, because it was my grandmother's favourite expletive when anything went wrong.  Other people might swear, but my grandmother said 'Jesus Wept!!' 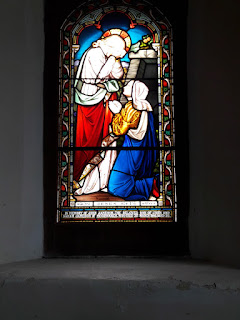 It has the atmosphere of an ancient place - peaceful and full of history. Even an atheist can feel the spirituality that lingers there. And there are so many stories - I can feel my fingers itching to get out the pen!