The glass has been falling all the afternoon,
And knowing better than the instrument
What winds are walking overhead, what zone
Of grey unrest is moving across the land,
I leave the book upon a pillowed chair
And walk from window to closed window, watching
Boughs strain against the sky

And think again, as often when the air
Moves inward toward a silent core of waiting,
How with a single purpose time has traveled
By secret currents of the undiscerned
Into this polar realm. Weather abroad
And weather in the heart alike come on
Regardless of prediction.

Between foreseeing and averting change
Lies all the mastery of elements
Which clocks and weatherglasses cannot alter.
Time in the hand is not control of time,
Nor shattered fragments of an instrument
A proof against the wind; the wind will rise,
We can only close the shutters.

I draw the curtains as the sky goes black
And set a match to candles sheathed in glass
Against the keyhole draught, the insistent whine
Of weather through the unsealed aperture.
This is our sole defense against the season;
These are the things we have learned to do
Who live in troubled regions. 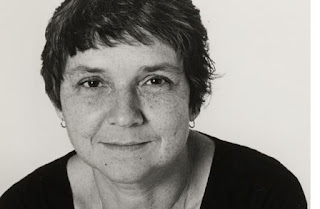 We are flooded again today - between 2 and 3 feet deep on the ground floor.  But fortunately everything that could be wrecked or ruined has already been wrecked and ruined. A skip full of debris, sodden furniture, fridges and washing machines, destroyed in the flood two weeks ago, has disappeared underwater and odd items keep rising from the depths in a surreal fashion and floating off down the river.  A fridge in full sail has to be seen to be believed.  We have been warned that we may flood again on Christmas Eve when Evil Eva is due to lash us with her stormy tail. So this poem seemed quite suitable for both the Solstice and the flood.

Adrienne Rich is a profound and political poet who has had a major influence on my life - she was my first brush with feminism.  Her work is amazingly consistent; from her first published poems (like Storm Warnings) to her later poetry, there is a recognisable voice and character.  Some of her poems are among my all time favourites.  Poems like Diving into the Wreck, What Kind of Times Are These?, Snapshots of a Daughter in Law, White Night, but particularly the long poem North American Time.  Stanzas from this are burned into my memory.

II
Everything we write
will be used against us
or against those we love.
These are the terms,
take them or leave them.
Poetry never stood a chance
of standing outside history. . .

III
Try sitting at a typewriter
one calm summer evening
at a table by a window
in the country, try pretending
your time does not exist
that you are simply you
that the imagination simply strays
like a great moth, unintentional
try telling yourself
you are not accountable
to the life of your tribe
the breath of your planet.

IV
It doesn't matter what you think.
Words are found responsible
all you can do is choose them
or choose
to remain silent. . . .


There's a wonderful article about Adrienne Rich's work written by the Irish poet Eavan Boland, who comments that;  'For so many years Rich has been typecast as a poet of statement, anger, witness. But the meticulous artistry of poems such as “Diving into the Wreck” or “Power” deserves a closer look.

In poems such as these, the marvelous weaving in and out—of relations between line and line, between music and voice, between image and insistence—is intense and exemplary. The artful deployment of broken space on the page, the fractured syntax, and the absent punctuation signal stylistic decision at the highest level. Not just the poem, but also the history of Rich’s poetic independence, unfolds as we read.'