Because of the deep ocean trenches just offshore, Kaikoura used to be a big whaling port. But (thankfully) an archway of whales’ jawbones along the seafront is all that’s left of the trade. 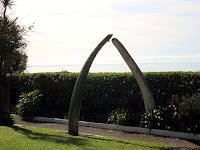 Now the emphasis is on conservation. Sperm whales feed here all year round, humpbacks visit regularly on their way from the antarctic to their tropical breeding grounds, and orcas also appear a few times a year. Very occasionally, maybe once in a lifetime, someone sees a blue whale. So the main tourist trade here is whale watching.
I rang up on my first morning to ask about going out on the boat and was told that I’d have to be quick because the weather was due to worsen and further trips were likely to be cancelled. So I swallowed my breakfast and went straight up to the centre. The fee wasn’t cheap, and I did think twice - how likely were we to see a whale at all, I asked myself? Knowing my luck I probably wouldn’t see any of the assorted wildlife on the postcards.
I was herded onto a big catamaran with about twenty other people of all ages and sizes. The weather was cool and bright, but a brisk wind was beginning to come in off the sea. We went a couple of miles out watching (on the echo sounder) the sea floor drop away into the canyon - going from 80 metres depth to about a 1,000, then up to 3,000 in the space of a few minutes. Then the boat stopped and the captain began to use a hydrophone to pick up the whales. The sound they make is eerie - first of all like someone turning over a reluctant engine, then a chattering and clicking, then silence. The boat took us to where they believed a whale was under the surface and we waited. Whales come up for breath every forty five minutes or so and it can be a long wait.

Then suddenly there it was, my first whale. A long shape, rather like a floating log with a dorsal fin, occasionally blowing steam at one end. A male sperm-whale. Nothing much to see, but it was a REAL WHALE! Then, spectacularly, after about ten minutes, the body began to curve and up came the tail as the whale slid back into the depths.

I managed to get photographs and was so intent on getting it focussed that I didn’t have time to really look. But I had actually seen a whale. Then, suddenly, the boat was racing for the horizon because someone had spotted another one out there. Unfortunately it dived before we arrived, but as we turned back another, rather bigger, whale surfaced. This time we got a longer, closer look and some more photographs.


It wasn’t the emotional experience I’d expected. I had thought that proximity to the largest mammal on earth would have a spiritual quality to it. But perhaps being with so many other people precludes this, and the urge to take photographs doesn’t allow you time to experience anything very deeply. But I’m glad that I went. All my life I’ve wanted to see a whale, close up, living and breathing in the water, and that’s what I got.

A big bonus was the pod of very rare Hector’s dolphins playing round the boat on the way back.

Since I arrived here I’ve been reading Mary McCallum’s novel The Blue, (her first novel published by penguin in 2007) which is about a south island whaling community in 1938. I’ve found it fascinating. It begins a little uncertainly, but soon had me gripped by the lives of the characters. How glad I am that the whaling industry no longer exists here.
Some whale-populations will recover. Sperm whales apparently now number about half a million, but there are only around 400 of the northern right whale - too small a gene pool to survive and the humpback and the blue whale are also on the brink of extinction. Apparently, we were told, the major causes of whale death are hunting, abandoned deep water fishing nets, ship’s sonar devices which interfere with a whale’s own navigation, and pollution which affects breeding. All generated by human beings. It makes one feel ashamed, and I also felt sad to think that perhaps my grandchildren won’t get to see whales in the ocean at all. I’d love to go out again and this time just look and listen, but the weather has worsened and tomorrow’s trips are cancelled.
Labels: New Zealand Whales