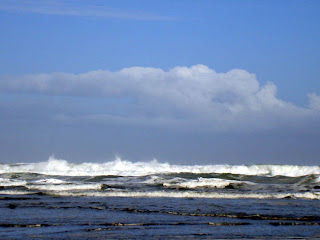 This must be one of the friendliest countries in the world. Something to do with the fact that although it’s bigger than Britain, only about 4 million people live in the whole of it, whereas Britain now has a population of about 70 million. Here in NZ people still feel like talking to you and they’re very glad to see a new face.

I’ve almost recovered from the jet-lag, except that at 6pm promptly, my legs turn to jelly and my head disconnects from the rest of my body. Last night I stayed awake until 9pm, and tonight I hope to manage 10pm.

One of the wonderful things about New Zealand is the ocean. It has some of the wildest and most beautiful beaches in the world. Ninety mile beach (actually only about 60 miles long) is the most famous, but around every corner there is another stretch of rock and sand. The sea has an uninterrupted run round the southern hemisphere before fetching up on the land here, so the surf can be spectacular. Is there anything better than walking, alone, for miles along the sand listening to the sea? I’m currently at a place called Baylis Beach, somewhere north of Auckland, where the surf is amazing and there’s a wonderful little bar and bistro called the Funky Fish. It’s raining, but then it is winter here and it’s not much different from the northern English summer!

One of the least wonderful things about New Zealand is the infra-structure. It can be very difficult to find internet access once you’re out in the back-blocks. Apparently McDonalds have free WiFi, but I haven’t found a McDonalds yet. So that explains why I haven’t been able to put anything up on the blog for few days. A small population means a small consumer base and fewer people to pay for things - so New Zealand struggles to provide services that are taken for granted elsewhere. Decent television being one of them. NZ TV is one of the most boring I’ve ever seen. Apart from the programmes they import from elsewhere, there’s very little you’d want to watch. And anything decent gets exported pretty quickly - like the Flight of the Conchords - leaving a big gap.

The three days I allowed myself to recover from the flight are almost over and tomorrow I have to start work - preparing for the talks and interviews that Penguin have arranged for me here. I’m never very confident about them, and the only way I cope is by doing as much preparation as possible.  In the meantime, I'm going to take another walk along the beach and see what the ocean has washed up.  Some strange and wonderful things floating in from the Tasman sea. 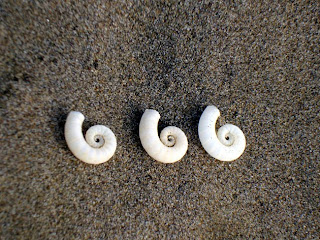