Vazha, Sculpture and the Misty Mountains of Pruno 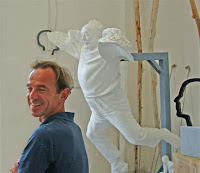 I've just come back from the studio of Vazha Mikaberidze, who sculpts as 'Prasto'. Vazha is a Georgian, living and working in Italy. His work extends from the figurative to the abstract and even the conceptual and his studio is crowded with examples. Huge textured plaster sheets stand against the wall, with seductive tactile patterns. Vazha takes a rubber mould from the trunk of particularly interesting trees. He then cuts it lengthwise and opens it out flat to reveal the patterns of the bark, selecting sections to cast in plaster and then in bronze or nickel. In another corner a life-size man springs from the wall, arms spread out, his jacket flying on either side like wings. This is Sergei Parajanov - a Georgian film director whose work and personal
beliefs put him in a soviet gulag for more than six years. The plaster model, bursting with character, is the maquette for a bronze outside the opera house in Tblisi. 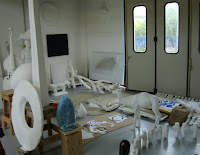 Around the floor are beautiful abstract forms - many of them referencing the natural world. Delicate figures form a circle around a pair of feet, like a corps de ballet - a sculpture that was actually made as a stage set for a ballet. It is part of a body of work that is a homage to the choreographer Balanchine which Vazha is currently working on though the project is on hold at the moment until the situation between Russia and Georgia is resolved.


Vazha's stories are a reminder that, whatever the problems of funding in Europe, the politics of art are much simpler and less dangerous here than elsewhere. 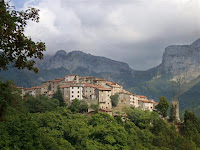 Afterwards we drove up into the Apuane to have lunch at a little hill village called Pruno, where you can have a plate of home-made pasta with wild-boar sauce for 6 euros and where the wine comes in earthenware jugs.

The weather is changing with the full moon. After two months of searing temperatures and no rain, clouds are gathering over the hills, and everyone is hoping for some wet weather. The trees are scorched to brown and the rivers are dry. Tonight it is so humid our clothes are sticking to our backs and the mosquitos are attacking every square inch of skin not coated with chemicals. Not quite paradise - but almost!
Labels: Alpe Apuane art Balanchine Italy Prasto sculpture Sergei Parajanov