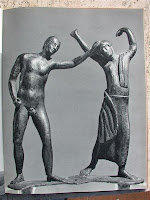 Like most writers, I have two people inside my head. One is The Writer, who is always scribbling - mostly garbage - and the other is The Editor, whose task in life is to keep their talkative twin under control. The Writer is incorrigible, even in conversation, twisting everything into a narrative, being cavalier with Facts and ruthless with Truth when it gets in the way of The Story. The sensible Editor purports to deplore such reckless conduct, but can't resist doing a bit of tweaking - deleting this, substituting that, altering a word here and a word there - in order to make a Better Story. The two quarrel incessantly. Truth is absolutely disregarded.

But they are absolutely inseparable - what would one do without the other?


Image - Etruscan Museum in Volterra
They are supposed to be dancing, but at first glance it looks as if they are fighting.