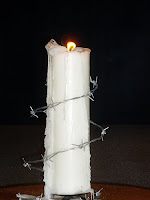 I suppose there was hardly a person on the planet who didn't - at some point yesterday - remember what happened on the 11th September 2001. And people are still asking Why? I spent almost a decade living in the middle east - working for an arab broadcasting network at one point - and was always saddened by its troubled politics. The roots of the conflict that led to 9/11 go a long way back - some of them feeding on the genocide that led to the terrible injustice perpetrated by western colonialism. Until this conflict is resolved, I don't think anything will change. But I think the poets say it best. I'd like to put up two poems, one by Israeli poet Yehuda Amicai and the other by the Palestinian poet Mahmoud Darwish and I've lit a candle (amnesty international) for peace.


Half the people in the world love the
other half, half the people hate the
other half . Must I, because of those
and the others, go and wander and
endlessly change, like rain in its cycle,
and sleep among rocks, and be rugged
like the trunks of olive trees, and hear
the moon bark at me and camouflage
my love with worries, and grow like the
timorous grass in between railway
tracks, and live in the ground like a
mole, and be with roots and not with
branches, and not rest my cheek upon
the cheeks of angels, and make love in
the first cave, and marry my wife under
the canopy of beams which support the
earth, and act out my death, always to
the last breath and the last words,
without ever understanding, and put
flagpoles on top of my house and a
shelter at the bottom. And set forth on
the roads made only for returning, and
go through all the terrifying stations -
cat, stick, fire, water, butcher, - between
the kid and the angel of death?