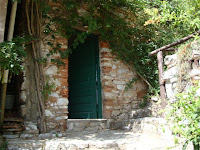 Not so much a house, more like a small shed. But it’s clean and dry. Rather like sleeping at the bottom of a well - windows high up in the wall, light filtering down.

It reminds me a little of the Katherine Mansfield memorial room at the Villa Isola Bella in Menton - small, viewless and without facilities. Holders of the KM fellowship were expected to work there during their tenure, but until recent improvements, that was impossible. KM’s companion Ida Baker, who had lived with her at the Villa, was heard to remark disparagingly, after its creation, that the room had been a gardener’s shed when they were there and that KM had never even been inside it at all. Now it is a shrine to Katherine Mansfield's memory.

The Poet’s House at Peralta has been, until this week, a store room. But with the hamlet filled to bursting with Irish guests for a sixtieth birthday party, every room has had to be pressed into service. The Poet’s House has been emptied of old furniture and I’ve just spent two days painting it out in the traditional white, blue and terracotta of Tuscany and then scrubbing the floor clean enough to take a mattress and a chair.

So here I am. It’s a bit of an expedition to the loo in the night and I’m borrowing a shower - just like camping! But there’s a tiny triangle of terrace at the back between the room and Neil’s workshop in the tower. I’ve put out a chair and table and it’s peaceful enough to write, with views down over the valley. No one knows why Fiore di Henriquez, who restored the ruined, abandoned, hamlet of Peralta, called this little shed the Poet’s House, but the least I can do for her is to write a poem in it and, if I can get it knocked into some sort of rough shape, I will put it up on the blog.
Labels: Fiore di Henriquez Katherine Mansfield Peralta Tuscany The Poet's House