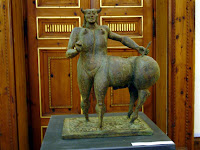 It already seems a long time since I left Italy and I've been very busy trying to revise for my Italian exams this week, and getting side-tracked by things I'd much rather be doing than learning Italian verbs! One of my displacement activities has been putting all my photos on the computer. This time, rather than landscape, I seem to have a lot of art exhibitions. I suppose that, living with a visual artist, I probably go to more than most people and they always make me feel very envious. I've never been able to draw - not even a cartoon cat. How wonderful to be able to create a visual image that doesn't require you to speak the language before you can read it. That's the biggest drawback of being a writer - it's culture specific. Nothing is ever the same in translation.

When I look at a painting or a sculpture I instinctively want to start creating a story round them, but this isn't always possible with abstract art. This, Neil explains, has a secret language of its own which, like most people, I don't fully understand - though I love the rhythms of shape and colour. It was Neil who taught me to look at abstract art suppressing my narrative instincts. He taught me about flowing lines, intersecting planes of light and dark, relationships of mass and space, explained that - like listening to music - you can look at something and enjoy it without understanding exactly how it's structured. 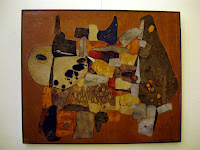 One of the highlights of my trip to Italy was an exhibition of the work of Rosario Murabito. It was being held in a nineteenth century palazzo, originally built for an Austrian princess, but now owned by the local commune who find it too expensive to maintain. So it is rarely used. You get the feeling that the whole of Italy is full of historic buildings that no one can really afford.

Murabito was one of a group of artists living in the area during the post war period, dividing their time between Tuscany and New York. He did his best work in the fifties and sixties - much of it on display here. As we walked through the grand reception rooms, footsteps echoing on the marble floors, there were paintings, collages and sculptures that took your breath away when you stood in front of them - like hearing an authentic voice in poetry - that prickle at the back of the neck that says 'yes, this is something extraordinary'.


He experimented widely, like Picasso, with different mediums and techniques, migrating from figurative to abstract and back again. There were strange, androngynous figures out of mythology, a wonderful, almost abstract bull that could have leapt out of a cave painting and some collages in coloured leather that I would happily have taken home with me. 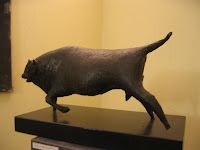 Murabito's work is now rather unfashionable and on the two evenings we visited the exhibition, we were the only people there. He died in 1972 and left his own house and some of his work to the local commune. They've never had enough money to do the necessary repairs to the building so that it could be used as he wished - as a museum to display his work - so exhibitions like this are rare and not to be missed.
Labels: art Italy Rosario Murabito