In the Sunny South 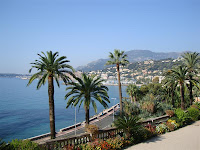 I left a cold, grey Liverpool on Ryan Air, but when I arrived in Menton it was sizzling in over 30 degrees of heat. For the next few days I had clear skies, sunny days and balmy nights. This is the second time I've been there and, except for the fact that it is very expensive, I'm beginning to like it a lot. Menton sits on a narrow coastal strip at the foot of steep grey rocks - Monaco is a five minute drive in one direction and on the other side Menton strays casually in and out of Italy. 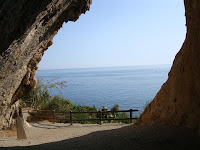 Just over the border, so technically Italian, are the Balzi Caves - originally a neolithic settlement with carvings.

In the town itself there is a cathedral on the summit of the rocky promontory, reached by a succession of stairways, a bay with a pretty marina and further up the coast a larger dock where the boats of the super-rich wait for their owners to turn up. Each one is worth more than the GDP of a small third world country. They're owned by people like Roman Abramovitch, Mohammed Al Fayed, a couple of Greek shipowners, a pop star or two, and the odd banker - so no doubt there will be a few boats up for sale shortly! 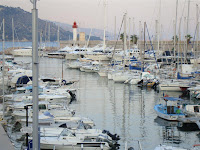 We stayed in a little pension up in the hills where Madame vented her fury over it all. 'Bankers are nothing but thieves - they have stolen our granchildren's future. I am afraid for us all!'. Her husband seeemed frail and rather gaunt, but it would have been impolite to ask why, and there was an elderly boxer dog with a spiked collar straight out of a cartoon. The room was tiny, but clean, and the bed had froggy bed linen! 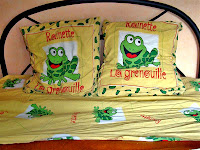 The conference dinner was being held at one of Menton's nicest hotels, with a restaurant on the beach. We ate grilled sea bass and drank New Zealand champagne (courtesy of the ambassador) and listened to the sea lapping on the shingle a few feet away. The illuminated spire of the cathedral was beginning to strike up a relationship with a large crescent moon, just hovering over the bay and everything felt perfect. I even dared to go paddling.

The following day began at 8.30 and was tightly packed with events. There were several authors among the assembled scholars - well known in New Zealand and European circles perhaps rather than the UK. Vincent O'Sullivan - one of New Zealand's foremost novelists and poets gave an eloquent and thoughtful view of Katherine Mansfield's work. C.K. Stead, author of the novel 'Mansfield', whose poem 'Nine Ways of Looking at a Fantail' is in the current London Review of Books, talked about fictionalising real lives. The German poet Dieter Riemenschneider was there with his wife, New Zealand poet Jan Kemp, and novelist Kirsty Gunn opened the conference with a short story 'This Place you Return to is Home', written during a writer in residence post near the place where KM was brought up.

I also met, for the first time, Janine Renshaw Beauchamp, KM's great neice, who was brought up by Katherine's sister and who was able to give me a real sense of how Katherine's family worked as a unit - an inside view of the family politics. 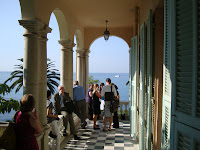 When you write a biography you worry that you will have got some small but important fact horribly wrong, or that there is something you have missed - however hard you try, something always slips through. I listened avidly to every talk, every reading, mentally editing and checking - and was totally exhausted by the time it finished. After a formal ambassador's reception (more champagne) and a concert by the Menton children's choir, we slipped off to have dinner - more modestly this time! - at a French Chinese cantina. We resisted the sweet and sour frog's legs (the bedlinen engraved in our memories) and settled for scallops in sweet chili sauce with noodles. And mineral water. There is only just so much champagne one can take!

We slipped quietly into the pension very late, and were aware of Madame's husband and the dog peering at us round the edge of a door in the dark recesses of the hallway.
Labels: Fiction Katherine Mansfield Menton Poetry