Back to the Land of the Great Grey Cloud 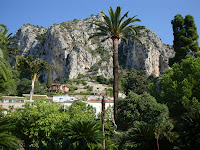 From Menton we said goodbye to Madame and 'Spike' the dog and set off very early. It's quite a contrast to drive up from the hot south of rocky outcrops and maritime pine trees, to the flat prairies of central France with their massive grain silos like agricultural cathedrals.

And then up into the wooded farmlands of northern France, through a recitation of names in the Book of Human Misery. Amiens, Arras, Crecy, the Forests of Roland, the Field of the Cloth of Gold, Picardy, Ypres, Somme, Vimy Ridge, Calais. The landscape is scattered with war memorials that commemorate the ancient battles of Charlemagne, Joan of Arc, Henry Vth - to name only a few, as well as the graveyards of both First and Second world war victims. When you see how closely packed they are, you get the impression that the fields here must be soaked with the blood of over a thousand years of conflict. 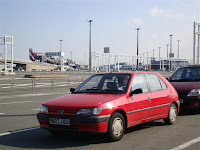 The old car was doing very well and we were just congratulating ourselves when, just short of Reims, heading for the Calais ferry, one of the back tyres suddenly deflated and the rear end of the car began to dance across two lanes of the - fortunately quiet - autoroute before I could bring it to a halt on the Bande d'Urgence. Neil managed to keep his cool with great fortitude in the passenger seat! We had barely opened the boot to look for the jack when a breakdown patrol pulled up behind us with flashing orange lights and the mechanic had us back on the road again within twenty minutes. But by then we were both tired and not up for more adventures so we stopped at Reims.

It was a beautiful, lively place, though it was too late when we arrived to see much of it. We got up early the following morning to explore the cathedral. But typically (this always happens to me) the exterior was shrouded in cling-wrap for restoration! Inside, the stained glass windows are almost too big to take in. Very few of the originals survive - having been blown up in the 1914-18 conflict, but there are four huge rose windows in glorious medieval glass. The whole effect when they were all intact must have been incredible - though very dark.

The cathedral originally had a labyrinth like Chartres, Amiens, St Quentin and several others in this part of France, though it was destroyed in the 18th century.

Like these other cathedrals Reims is dedicated to the Virgin Mary and no one seems to know what the significance of it was, though some of the others also have Black Madonnas. Reims feels very female orientated and has chapels dedicated to Joan of Arc and to St Therese.

Taking photographs was difficult because of the light levels, but I managed one of the nave with its glorious stained glass as well as the modern windows of Marc Chagall.

On the ferry approaching England there was a long line of smoky haze overhanging the white cliffs of Dover. As we drove further north the haze deepened and by the time we reached Cambridge a line of darker cloud appeared on the horizon, growing wider and wider until the sun disappeared and the sky was uniformly grey. Welcome back to England! 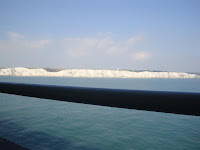