I woke just before dawn on Sunday morning, in a strange bed, listening to the rain on the windows.  It had rained for more than 24 hours and I dreaded to think what I would find at home.  I got up, dressed as quietly as possible (my friends were asleep) and slipped out of the house.  The weather was still fairly wild, but I could see, as I walked down the lane in the early light, that the river had gone down just a little.  I climbed back into the Mill through my neighbour's garden.  The electricity was off, but I had a torch and could see that the building was standing, though there was still the eerie sound of water sloshing around below me.  The river had retreated from the Mezzanine floor, but was surging through the ground floor, several feet deep, at speed.  I felt considerable relief that it hadn't been worse. At some point in the night the amount of rain falling and the rate of the river taking it away had obviously achieved some kind of equilibrium.
All day, as we waited for the river to go down, news came in of the devastation that Storm Desmond had wreaked. In Appleby people had been rescued from their houses by lifeboats as the water overwhelmed the flood defences.
All over Cumbria roads had been swept away, there were landslides, and bridges had collapsed under the force of the water.  In Keswick, Cockermouth and Carlisle families were once more flooded out of their houses less than 5 years since the last time it had happened.  Some communities in the lake district were completely cut off. Appleby was one of them. 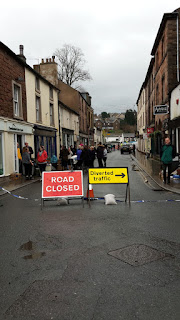 It was Monday before we could get into the town centre at all.  As we (and many other people) live on the opposite side of the river to the shops, it was a 15 mile round trip to get to town because both bridges were closed waiting for an engineer's inspection. 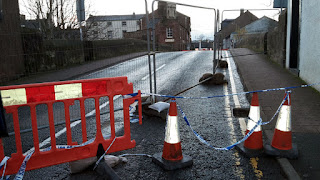 It was ridiculous to live only a few hundred yards from the town centre and have to drive miles to get a pint of milk!  In Appleby the devastation that local businesses have suffered (some of them only recently opened) is heartbreaking.  Small town shops struggle anyway and this could be a death blow to some of them - now facing months of closure. Jobs will inevitably be lost in an area that doesn't have a great deal of employment.
For us, the retreating flood water gradually revealed the extent of the damage.  The watermarks on the walls told their own story. Our graceful 18th century ground floor windows had been smashed irreparably, two partition walls punched through by debris carried in the flood water, and the chipboard floor to the Mezzanine workshop and studio was sodden and spongy. A wooden floor over one of the former mill races had been ripped up and broken apart - the planks carried out on the tide. Outside, my garden fence and gate had been shredded and the garden was a waste land of mud and debris. 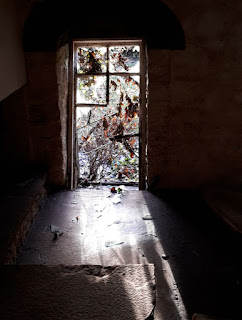 But the biggest shock was finally being able to open the door to the tenant's flat and see what families all over Cumbria were having to face.  Furniture and personal items, sodden and muddy, tossed around and piled up by the flood water which had reached up almost to the ceiling. Cooker, fridge, washing machine and every other kitchen appliance completely ruined.  We can't get flood insurance here, because we live on the river bank, virtually in the river, so replacements and repairs have to be funded ourselves and, like many others here, we face several months without income until the building can be dried out.  Luckily most of the tenant's belongings, upstairs, were intact.
We count ourselves very fortunate that our living accommodation is untouched while so many people are homeless. There will be a lot of hardwork and financial angst, but at least we have a roof over our heads and a dry bed to climb into. All our worries are for the future.  We were trying to sell the Mill and down-size, but no-one wants a building that floods.  All over Cumbria, 'For Sale' signs are standing forlornly in drenched gardens and owners are being faced with the impossibility of moving. Climate change is making extreme weather events the norm. If this is a 1 degree increase in global temperatures then what will it be like when we reach the proposed 1.5 degrees?  Most climate scientists say that unless we can stop all emissions now (which seems unlikely), we're on track for 2 degrees, which doesn't bear thinking about.
I used to love the sound of the rain pattering on the roof, but now it doesn't sound so sweet. We have been flooded 4 times in 15 years, though this was by far the worst. Storm Desmond brought a record rainfall for the British isles - recorded on Honister Pass in Cumbria at 341 mm of rain in 24 hours, which is about 14 inches.  For hundreds of years, the millers have recorded flood levels on the sandstone cliff that the Mill is built into.  Desmond is about 2 feet higher than any previous recorded level.  So far the building has withstood the river's force, but every structure has its limits. That is what will keep me awake at night.